In this article, vehicle engineer, Peter Leiss, P.E. provides an overview of truck underride incidents. His discussion includes a description of underride events, why they occur, relevant US and international standards, and how these incidents are typically investigated from a forensic standpoint. 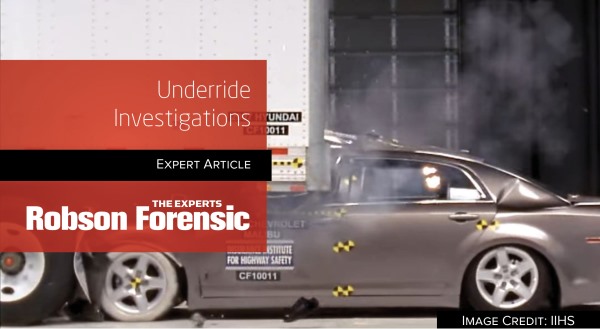 The term ‘underride’ is most commonly used to describe a vehicle collision in which a passenger vehicle enters the open space beneath the frame of a tractor trailer. This phenomenon occurs as a result of a geometric incompatibility of two vehicles’ crash absorbing structures. The crash absorbing structure of many passenger vehicles, generally strongest at or below hood level, is lower to the ground than the structural members of a trailer.

Regardless of whether the impact is to the rear or the side of the trailer, the mismatch between crash absorbing structures frequently results in increased passenger compartment intrusion, particularly at shoulder and head level. These crashes result in a far higher rate of serious and/or fatal injuries than would be expected from non-underride incidents of similar magnitude.

According to a National Highway Traffic Safety Administration (NHTSA) study conducted in 2013, 934 deaths involving underride occurred in 2008 and 2009. Rear underride was noted in about 75% of collisions in which the striking vehicle was a light vehicle; underride was up to the base of the windshield in 36% of those collisions.
(Source: Heavy-Vehicle Crash Data Collection and Analysis to Characterize Rear and Side Underride and Front Override in Fatal Truck Crashes, March 2013)

According to Insurance Institute for Highway Safety (IIHS) research, nearly 15% of fatal collisions involving a passenger vehicle and a large truck involved a collision with the rear of the truck. An IIHS analysis of a smaller sample of fatal crashes found that 82 percent involving the rear of the truck produced underride.
(Source: IIHS Recognizes Semitrailers with Good Underride Guards, March 2017) 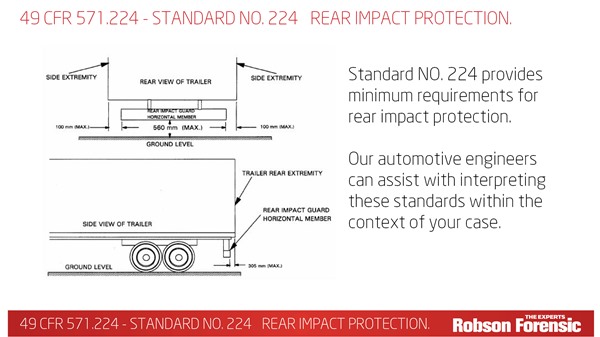 These standards were enacted in 1953 and revised in 1998 to reduce the risk of passenger compartment intrusion. They require structure to be no more than 22” (560 mm) above ground level and 12” (305 mm) in front of the rearmost portion of the truck/trailer and to withstand the prescribed loading parameters. The load requirements for underride guards are approximately equivalent to the force of a compact car striking at 30 MPH in a full overlap collision.

Canadian standards are similar, but were updated in 2007 to increase the load capacity to that of a 35 MPH collision. Europe has regulations in place for side underride guards. There is currently no US requirement for side guards, but according to IIHS data, in 2015 nearly 20% of the passenger vehicle occupants killed in two-vehicle crashes with a tractor-trailer died when their vehicles struck the side of a tractor-trailer.
(Source: IIHS Tests Show Benefits of Side Underride Guards for Semitrailers)

IIHS recently tested a newer product that protects passenger vehicle occupants from the dangers of side impact under ride collisions. 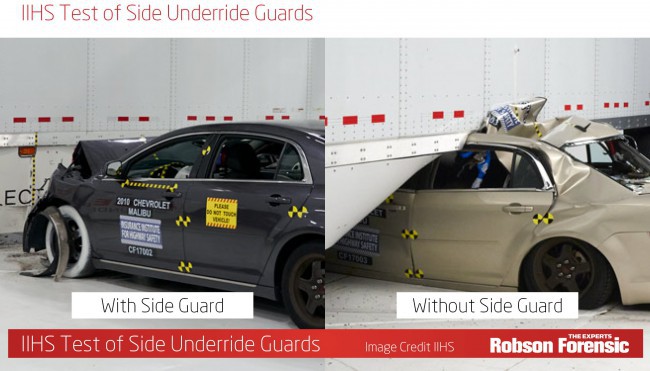 With an established delta-V, investigators can compare vehicle damage, injuries, and passenger compartment intrusion, against anticipated values for crashes of a similar magnitude. In instances where injuries and intrusion exceed anticipated values, there may be cause to investigate potential defects in safety systems. Failed underride guards should be inspected to determine if the failure was caused by an excessive collision force or a potential defect in design, material, or assembly.

Submit an inquiry to connect with a technical expert to discuss your case.

Wet leaves, fog and early frost, followed by snowy roads.. Fortunately you can steer clear of fall and winter driving hazards with these expert, up-to-date tips for staying safe behind the wheel.…

In this case, a Honda collided head-on with a BMW. In the course of litigation, each driver provided a substantially different version of how the collision occurred. Robson Forensic was retained to…

In this presentation, automotive engineer, Peter J. Leiss, P.E., provides an overview on Electronic Stability Control (ESC) systems, including information on how ESC systems work, their abilities and…