In this article, industrial engineer, Harry Ehrlich provides a brief technical synopsis of an incident he was retained to investigate involving an apartment building trash compactor. In this case, an otherwise safe piece of equipment became unreasonably dangerous when a “workaround” was adopted that bypassed vital safety equipment. While the information is specific to a particular incident, the principles discussed, regarding safety guarding and workarounds can be applied to many incidents. 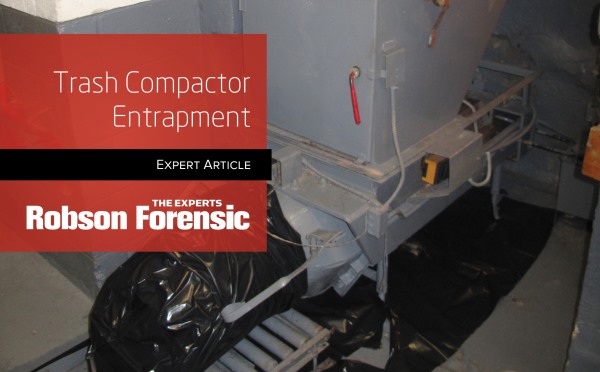 This incident involved a building porter whose arm was crushed and nearly severed in a mishap involving a chute fed trash compactor. Industrial engineer, Harry Ehrlich was retained to inspect the machine and analyze the maintenance and operation of the equipment to determine the cause(s) of the incident.

In the normal and intended operation of a chute fed compactor, residents drop trash down a chute from the various compactor rooms located on the floors of the building. The compactor’s photocell sends and receives a light beam that senses the level of trash as it enters the compactor. When the level of trash rises to just above the moving compactor ram, the trash blocks the light beam, the sensor senses the condition of trash being present, and the ram is actuated forward. The forward motion of the ram pushes the trash out of the compactor and into a pre-positioned trash bag. When the trash level is below the light beam, and not blocking the beam, there is no machine motion and the machine remains in an automatic standby mode. 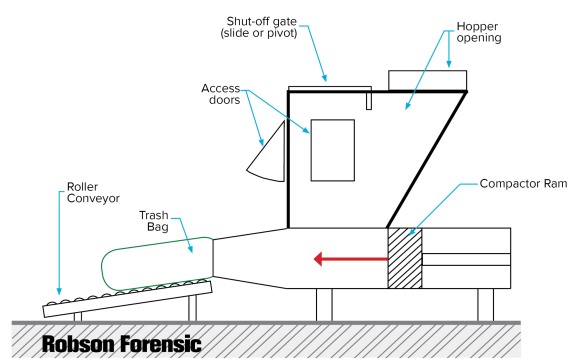 The incident compactor in this case was unable to operate in the intended fashion because the photocell was defective. Unable to detect the light beam, if the compactor was powered-on, the ram would cycle in a nonstop loop.

As a result of the defective photocell, the machine was not functional in the manner in which it had been designed. However, a “workaround” solution was created that allowed the machine to compact trash with manual activation. A “workaround” is generally defined as a bypass of a problem within a system, as opposed to actually fixing the problem. The “workaround” in this instance consisted of leaving the compactor turned off for most of the day and night, allowing trash to accumulate within the compactor as tenants dumped their trash down the chute. It was then the porter’s job to empty the compactor in the morning and afternoon. The porter testified that the morning’s accumulation of trash resulted in a “jammed” condition, i.e. a condition where the ram was not capable of pushing the trash out and into the trash bag.

It was while using this “workaround” procedure that the plaintiff was injured. The plaintiff was assisting the ram in removing the pile-up with the door open and his arm within the machine when the moving ram entrapped his arm and injured him. Had the photocell been operative, the pile-up condition would not have existed and the injury would not have occurred. Had the interlock not been bypassed, opening the door would have de-energized the ram.

The inoperative photocell was the defect that prevented the automatic and safe operation of the compactor, but was not the sole cause of the incident. Had the building owners and management company properly maintained the photocell and door interlock in working order, the incident would not have occurred. Mr. Ehrlich also found that responsible parties failed to provide appropriate training, maintain equipment warnings and safety manuals, and also neglected to provide adequate tools (push sticks) for clearing equipment jams.

The failure of both hardware and administrative controls are emblematic of cases involving workarounds. In a well-engineered system, along with adequate maintenance and training, machines and systems can operate safely and workers are not unnecessarily exposed to hazards. Anything short of fully repairing and adequately maintaining safety devices (i.e. a “workaround”) typically involves further safety compromises down the line and is likely to result in injury.

After six weeks of deliberations a Manhattan Supreme Court jury delivered the unanimous verdict of $14.7 million. It found the building owner and management company 100 percent responsible.

Harry has worked as an Industrial Engineer since 1978. He has held positions of increasing responsibility within industry and has been responsible for the design and manufacture of consumer products,… read more.

In this case, a five year old boy was injured by a carousel conveyor in a retail store. Among other findings, our expert concluded that the conveyor was not adequately guarded and unnecessarily…

With this slide deck, Michael Klein provided a Continuing Professional Education course on protective measures and complementary equipment that are used to safeguard machinery and equipment. Machine…

In 2010 Robson Forensic was contacted to investigate a case involving a 10-month-old girl whose finger was severed by a hinge on the stroller in which she was sitting; a horrifying incident for any…