In the first part of this three-piece article on trench collapses, the civil engineers at Robson Forensic discuss soil identification, which is an important step in determining which protective method is appropriate for protecting workers in, and around, trenches. 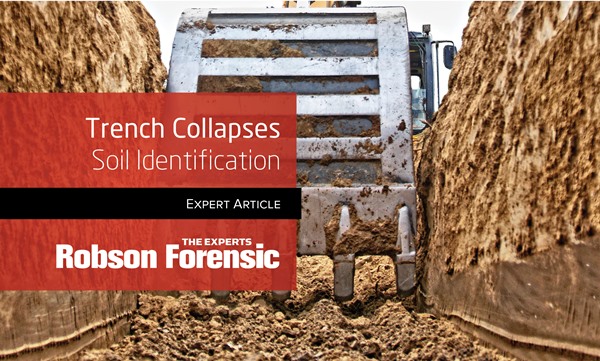 Standards addressing excavation safety are derived from a number of sources including the OSHA Construction Industry Regulations (29 CFR 1926, Subpart P – Excavations), as well as ANSI/ASSE A10.12 Safety Requirements for Excavation. One of the most important safety aspects in dealing with this matter is that workers must be trained on how/why excavation accidents occur, and then what can be done to minimize and/or eliminate the risk of collapse. There are a number of factors that may contribute to a trench collapse, including:

Soil is categorized in decreasing order of stability. The most stable type of soil is stable rock. The next most stable form of soil is Type A, then Type B, and finally, Type C soil. On earthwork construction operations, OSHA requires that the soil and/or rock being excavated be classified by a competent person. In order to do this, the competent person must perform a visual test, a manual test, or both.

The inspection conducted by the competent person should not be done just once at the beginning of each day and/or shift, because disturbances during bulk or trench excavation procedures may change a soil’s classification during the course of a work day/shift. 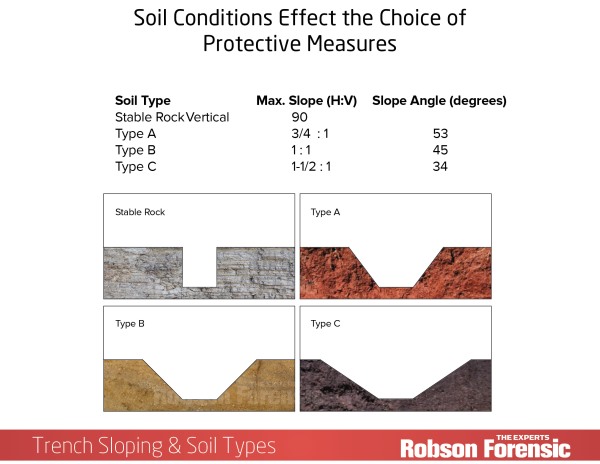 During earthwork and/or trenching operations, both a visual test and a manual test must be performed by a competent person, unless the visual test determines that soil is Type C.

Visual Soil Test - In a visual test, the competent person should inspect the soil and the surrounding area for the following:

Once the competent person has properly analyzed the soil and made a determination as to what the soil type is, the best method to protect the workers from an excavation collapse can be determined.

There are a number of variables on any site that determine the selection of protective trench measures; these variables are dynamic and in many cases, will be influenced by weather and surrounding conditions and activities. Among the civil engineers at Robson Forensic, there are many construction professionals with firsthand experience managing site safety and engineering protective systems for trenches and other hazards. Submit an inquiry or contact the author of this article to discuss your case.

David Gardner is a civil engineer with more than twenty-five years of professional experience. He provides investigations, reports, and testimony in matters involving construction claims and injuries.… read more.

In this article Civil Engineer, Bill Brewer discusses construction trench safety and provides an overview of the various safety measures used to protect workers from deadly trench collapses. The…

In the second part of this three-piece article on trench collapses, the civil engineers at Robson Forensic discuss why trenches collapse and provide an introduction to some of the most common methods…