Illegal maneuvers such as U-turns are among the top 10 causes of crashes involving trucks and cars each year. Trucking industry standards state that it’s almost never acceptable for a truck or tractor-trailer to perform a U-turn, and that is should be seen as a last resort. Many of the major motor carriers in the U.S. forbid U-turns entirely.

In this article, trucking operations expert Timothy Bussard shares one of this previous investigations, where a truck making a U-turn crashed into an oncoming van. 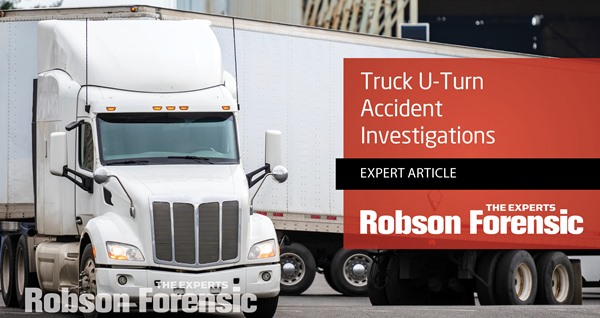 Motor carriers and CDL drivers are responsible for complying with both Federal Motor Carrier Safety Regulations (FMSCR) and state-level CDL regulations, which largely apply FMSCR standards to driver actions and duties. In this case, our trucking operations expert investigated the actions of the driver, as well as the policies and procedures of the carrier to determine if they violated applicable regulations in a manner that contributed to the cause of the crash.

In this incident, the driver was in a 70 foot long combination tractor trailer, delivering heavy freight to a construction site. After making the delivery, the driver exited onto a 2-way street with 1 lane of travel in either direction, heading southbound. He pulled onto the gravel shoulder on the right side of the road, preparing to attempt a U-turn to head back north.

When he pulled out to start the U-turn, he struck the right side of a van traveling in the southbound lane, causing injury to the driver. The tractor trailer driver stated that he had looked before attempting the turn, but did not see the van coming.

Robson Forensic was retained to opine on the actions of the tractor trailer driver and his motor carrier employer to determine their respective roles in the crash.

The Safety Director of the motor carrier acknowledged that U-turns should be a last resort, and that his driver did have other, safer options available. At the same time, no safety training specific to U-turns had been provided by this carrier to the driver. By failing to provide this training, the trucking company was in violation of FMSCR.

In addition to not providing training to their drivers, this motor carrier also lacked a Safety Program, as required by the FMSCR. A comprehensive Safety Program would include written policies and procedures, including training requirements.

In failing to establish an adequate Safety Program that educated their drivers on the dangers of U-turns, the carrier was in violation of the FMSCR and contributed to the cause of the crash.

CDL Manuals issued by each state provide instructions to CDL truck drivers regarding safe, attentive driving practices, and the rules of the road. This includes optimizing visibility of what is behind and to the sides of the truck, particularly in special situations such as lane changes, turns, merges, and other tight maneuvers. The driver should be able to see any hazard that may pose a danger, whether it be a condition on the roadway, another motorist, a bicycle, or a pedestrian.

In addition to being able to see potential hazards in the vicinity of the truck, managing the clear space around the truck is another crucial element of safe driving. This enables the driver to take action if something goes wrong, or if the driver needs to stop, turn, or merge. Because of wide turning and off-tracking, large vehicles can hit other vehicles or objects during turns. In this incident, the Safety Director testified that his driver would have needed 500 feet of clearance to safely execute the U-turn, and attempting this turn without the space needed was a violation of safety standards.

The investigation deemed this driver’s actions to be dangerous and in violation of roadway rules, and were a cause of the crash.

Making a U-turn with a large truck or tractor trailer is dangerous, and is often prohibited. Safer alternatives to making a U-turn include:

Motor carriers should provide their own guidelines for U-turns and roadway backing, which should be available to drivers and reinforced in training practices upon hiring and throughout the driver’s employment. If U-turns are not prohibited, drivers should be trained on when and how to safely execute them.

The trucking operations experts at Robson Forensic have logged millions of miles, with decades of experience in Fleet Safety and Management. All have managed, developed, and overseen safety programs for many local and nationally recognized Motor Fleet Companies.

Tim Bussard is a commercial transportation and warehousing expert with more than a twenty year track record of safety and training. He applies his expertise to Motor Carrier operations and regulatory… read more.

Parking or stopping a tractor trailer on the shoulder of a roadway creates a hazard for the motoring public, and is generally prohibited by trucking company safety policies. In this article, trucking…

This article provides an introduction to heavy truck crash reconstruction, including an explanation of why the Conservation of Energy (COE) method is crucial for accurate and reliable reconstructions.…

Many of the systems and components that record incident and crash data on heavy trucks are different than those found on conventional passenger vehicles. In this article, vehicle engineer Marcus…