In this article Civil Engineer Michael Tuttman discusses the locating and protection of underground utility facilities, provides an overview of the various safety measures used while excavating in the vicinity of utilities, and reviews the potential responsibility for damage to property and loss of life. 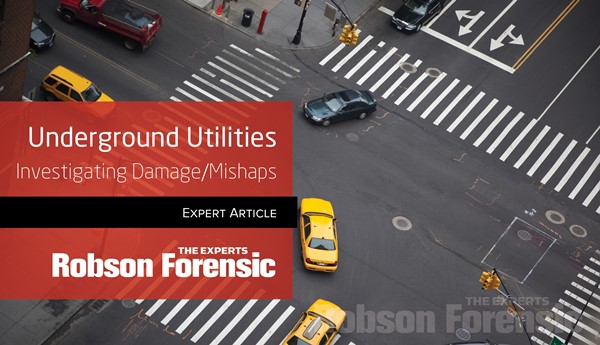 Excavation Damage to Underground Utilities - Out of Sight, Out of Mind. 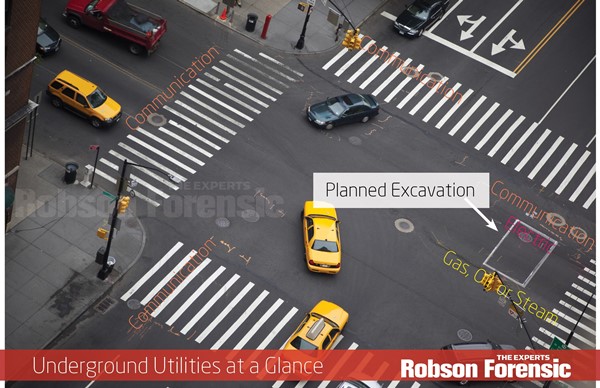 The consequences of damaging underground utilities during excavation work range from inconvenience (service outages and costly repair work) to catastrophe (large-scale property damage and loss of life). Hitting a telephone conduit can disrupt service to a neighborhood while damaging a major fiber optic duct bank can affect an entire region of the country. When a water or sewer main is damaged during construction work the resulting flooding can fill excavated areas, endangering workers and possibly leading to scour and erosion under adjacent roadways and structures. Breaking an oil pipeline can result in a spill that contaminates a large environmental area including sources of drinking water, and damaging a pressurized gas main can fuel an explosion and fire large enough to destroy an entire neighborhood.

Determination of the location of underground utilities can be like solving a puzzle. Utility companies and municipalities often, but not always, have maps; however, these maps frequently are not to scale, only indicate approximate locations, and are sometimes incomplete or even incorrect.

Federal law addresses utility protection during excavation activities; however, regulations within this framework vary from state to state. In New York the law requires that any organization or individual contact DigSafelyNY, an organization that coordinates construction activity with area utility companies, at least 2 business days prior to digging. Federal law requires that all states have similar “One-Call” organizations and regulations. Not only contractors, but homeowners (or anybody else expecting to dig beyond the top soil layer), are required to contact the local One-Call organization and have the area marked-out before digging.

The local One-Call (once referred to as “UFPO”) system can be contacted anywhere in the United States by calling 811 by phone and, once contacted, a “Ticket” will be established. One-Call will notify all Utilities serving the subject area and those Utilities are obligated to respond, either by confirming that they do not have any underground facilities at the specified location or by going into the field and physically marking out their lines with either color coded paint or small flags. Utilities are given 2 full business days to respond and/or mark-out their facilities and excavation operations cannot begin until all utilities have responded.

The locations marked-out are still approximate but are supposed to be within 1½ or 2 feet, horizontally, from the outside edge of the underground line (this dimension varies from state to state). It is not required for utilities to indicate the depth of a marked-out underground facility, a task that would be difficult, and inaccurate, using conventional location equipment. 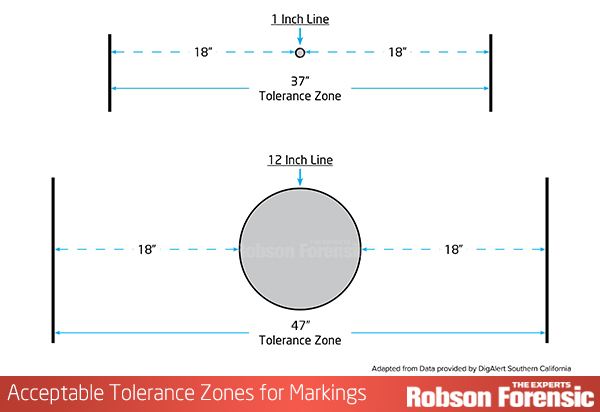 The most accurate method for locating underground facilities is Ground-Penetrating Radar; however, it is more involved and expensive than conventional mark-out techniques and its use is not required for utility mark-outs. While Ground-Penetrating Radar is not commonly used by Utilities for locating their facilities, it is a powerful tool that can be used by forward thinking designers on projects in densely developed areas with extensive underground networks.

Once marked-out, it is up to the excavator to safely uncover the underground utility, either by hand digging or vacuum excavation, physically (“positively”) locating it before starting to dig with mechanical construction equipment. In the case of Transmission Lines, due to their large and often high-pressure flow, the Utility can require that their representative be present during any excavation activity.

When an underground utility is damaged, there’s often little time to pause and think in the immediate aftermath of an incident. First the location surrounding the excavation must be secured, any injuries tended to, and the damage repaired. In extreme cases, the surrounding area may need to be evacuated. By law, unless the underground facility was mismarked, the contractor will be held responsible for all costs resulting from the damage and its repair. In the case of a Transmission Line, or even a large Distribution Line, these costs can easily run into five, or even six, figures.

On large projects, such as those run by municipalities and state Departments of Transportation, it’s required for contractors to have a safety plan in place which includes procedures in case of underground utility damage. Local One-Call organizations have programs to train all manner of contractors in proper procedures.

Responsibility is not always clear when an underground utility is damaged. It can be a result of improper or missing mark-out, or the damage might have occurred on a large jobsite where accountability is shared by multiple parties or contractors. Sometimes an uncovered main is nicked and its coating damaged or its steel gouged. If unreported by a contractor, and re-buried, the underground gas main can corrode and explode without warning years later.

Repercussions can be serious. If a damaged gas main explodes an entire neighborhood can be destroyed – with loss of life and extensive property damage.

A 6 inch underground gas main was damaged during interstate roadway construction on a site with multiple contractors. My investigation included documenting improper mark-out by the Utility and errors in excavation procedures by a particular contractor.

An underground fiber optic line, owned by a private business, was not registered with the local One-Call system. Because of this, there was no way for a contractor to be aware of its presence and they damaged it during their excavation operations. In this case the line’s owner was found to share responsibility with the contractor.

Cementitious grout was found in a municipal combined sewer main. This grout apparently had originated from the installation of retaining wall tie-back cables being done at an adjacent construction site, but had entered the sewer in a mysterious, unexplained manner. My investigation found that the grout had entered the sewer through an abandoned drainage structure that was damaged during boring operations for the installation of one of the wall’s tie-backs. The location of this damage was over 60 feet away from where the grout entered the sewer main, and the grout had flowed there through abandoned underground piping whose existence was not known.

After an underground vault was damaged by construction operations, I investigated possible options that existed for its repair, and prepared an estimate of reasonable cost for my proposed work in comparison to the more expensive option taken to demolish and replace the vault.

Within the context of an Underground Utility Damage event, Robson Forensic is positioned to provide a thorough and comprehensive investigation by addressing every aspect of the case, from improper procedure to materials failures, estimates of reasonable costs involved, specialty aspects of construction techniques, and forensic investigation of damage incidents.

In the second part of this three-piece article on trench collapses, the civil engineers at Robson Forensic discuss why trenches collapse and provide an introduction to some of the most common methods…

In the first part of this three-piece article on trench collapses, the civil engineers at Robson Forensic discuss soil identification, which is an important step in determining which protective method…

In this article Civil Engineer, Bill Brewer discusses construction trench safety and provides an overview of the various safety measures used to protect workers from deadly trench collapses. The…