In this case a construction laborer working on scaffolding was injured when an object he was holding contacted an electrical utility wire. The worker was shocked and fell to the ground below. This article recaps our involvement in the case and references some of the OSHA standards relevant to electrical safety.

A construction worker was injured while installing aluminum flashing on the exterior of a building. At the time of the incident he was working on scaffolding, approximately 22 feet above the ground, when the aluminum flashing he was maneuvering came into contact with a high-tension electrical utility wire. The construction worker was shocked and fell to the ground through an unguarded opening in the scaffolding.

An electrical engineer from Robson Forensic was retained to determine if the contractor and/or general contractor caused, failed to prevent, or permitted conditions to exist at the worksite which were unreasonably dangerous in a manner which caused the injury.

When the aluminum section bridged between the high-voltage utility line and the scaffold, it created an electrical path to ground, known as a “ground fault”. A substantial amount of energy and heat were released.

OSHA investigators interviewed the electrical utility and confirmed that the aluminum section had damage consistent with a power line contact. The electric utility also measured the distance from the power line to the scaffold and reported that the scaffold platform was 4 feet, 4” below the high voltage lines, and 1 foot, 10” away horizontally.

Our expert opined that under the conditions at the worksite, the scaffolding could not have been positioned in a manner that provided adequate spacing from the high-tension wires. When work near a utility line is necessary, the general contractor and/or his sub-contractor must make arrangements with the electrical utility to de-energize and ground, re-locate, or otherwise safe-off the lines in a manner that prevents workers and materials from coming into contact with energized components.

Our expert determined that the shock occurred because the injured worker was forced to work at an unsafe distance from energized utility lines. The fall occurred due to deficient perimeter fall-protection barrier of the scaffold. Our expert effectively demonstrated that had the correct instructions and training been given, and had the correct clearances between the scaffold and the energized utility lines been maintained, and had a proper perimeter fall-protection barrier been installed on the scaffold, the worker’s injury would not have occurred.

Because they may be built in proximity to overhead power lines, and because they are often made of metal, scaffolds can put workers at risk of electrocution. This risk can be removed through proper clearance and maintenance. Scaffolds must not be close enough to overhead power lines that they, or any conductive materials (e.g. building materials, paint roller extensions, scaffold components) that may be handled on them, come closer than 10 feet to the power line.

Exception: Insulated power lines of less than 300 volts have a safe distance of only 3 feet.

TIP: Because it may be difficult to determine if a power line is insulated, or what its exact voltage is, the 10 foot rule should always be applied.

Scaffolds may be closer to overhead power lines than specified above if such proximity is necessary for the type of work being done, and if the power company or electrical system operator has been notified and has either:

The figure below illustrates a common allocation of space on joint utility poles in the United States; the allocation is similar in Canada except that cable television and telephone are sometimes lashed to the same supporting strand. Starting at the top and working down, facilities on the pole are allocated into three spaces: 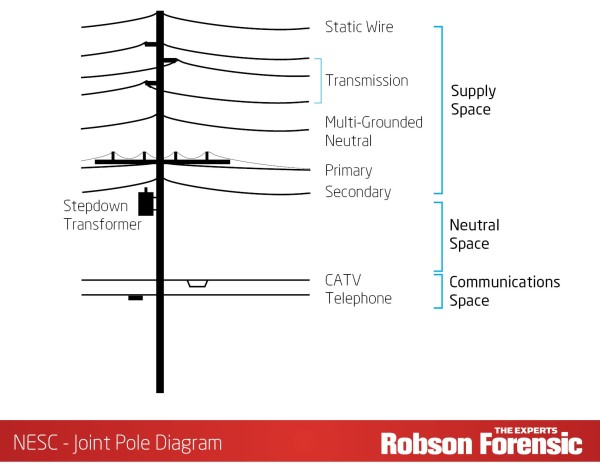 For more information on utility poles, read our article on Overhead Line Safety.

For more information submit an inquiry through our website, or visit our Electric Utility practice page.

In this article electrical engineer, Les Winter, P.E., provides an introduction to the most common causes of electrical shock injuries that occur in domestic, commercial, industrial, and construction…

In this article, electrical engineer, Jim Orosz, P.E., provides an introduction to the basics of electricity. He discusses voltage, resistance, current, and how each variable affects the injury…

In this article, Electrical Engineer, Jim Orosz, P.E. discusses the basics of safety as they relate to overhead utility lines, including a diagram of a typical joint pole layout. Overhead Line Safety…