A ‘false park’ incident can result in unintended vehicle movement after attempting or intending to put a vehicle in Park. False park is a widely recognized hazard throughout the automotive industry, frequently associated with injuries or fatalities when the unintended movement results in the vehicle striking a pedestrian (which often times was the driver prior to parking).

In this article, Automotive Engineer and Crash Expert Steven Becker discusses the factors that contribute to unintended vehicle movement, safety features currently available in passenger vehicles that can prevent false park incidents, and the standard of care for safe vehicle design. 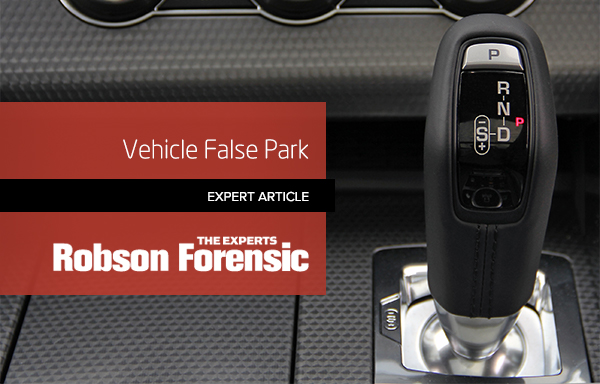 What happens when a vehicle is placed in park?

When the shift select system is placed in Park, a vehicle should be immobilized, safeguarding persons and property from the dangerous forces of a moving, likely driverless, vehicle. Shifting to Park initiates three primary processes to restrain the vehicle.

The combination of these processes is effective at immobilizing vehicles under normal and expected operating conditions. Unintended movement of a parked vehicle requires either a failure of a vehicle system, user error, or some combination of the two.

In this vehicle/pedestrian collision, the plaintiff parked to pick-up a food order, intended to put the vehicle in park, left the engine running, and exited his vehicle. Shortly thereafter the plaintiff’s adolescent son, in the passenger seat, recognized that the vehicle was moving in reverse and exited the vehicle to try and stop it. In doing so, the son’s leg was crushed between the vehicle and a bollard.

Robson Forensic was retained to determine if there was a defect in the vehicle that caused the collision.

Feasible and economically viable alternative solutions to prevent unattended/unintended movement were available at the time the manufacturer designed its automatic transmission gear position select system for this vehicle. The manufacturer failed to properly apply the design safety hierarchy and designed the automatic transmission gear position select system in this model without equipping such a solution. This occurred even though other manufactures using this same brand and model of transmission installed this guard in their vehicles.

Standard of Care for Auto Manufacturers

The ability to keep a vehicle stopped is among the most important safety requirements in automotive design. It is essential that the gear selector functions as expected and initiates the corresponding processes to immobilize the vehicle. Absent these safeguards, an uncontrolled vehicle moving while powered, or in neutral, becomes a dangerous condition that can cause serious damage and rollover/crush fatalities.

The standard of care is that manufacturers of products address known hazards and evaluate safer designs. Evaluation of safer designs takes into account many factors, most importantly safety, but also including:

Vehicles must be designed and manufactured in a manner that prevents ambiguity in the operation of critical safety systems. In product design, there are basic and fundamental steps that must be considered by a designer and/or manufacturer before selecting a design. The process is referred to as a Hazards Analysis, and after identifying each hazard will either:

The highest priority applies to designing out the hazard. If the hazard cannot be designed out, then the next priority is to isolate or guard users from the hazard, and lastly to warn against the hazard.

If there are practical design alternatives that would eliminate or reduce the danger, then that condition of danger is unacceptable and the design is defective. A proper hazards analysis would acknowledge the failure mode of an unattended unintended vehicle movement and identify its causes.

Modern vehicles can be designed with electronic safety systems to prevent a driver from exiting a vehicle before it is safely in Park. This can include systems that automatically set the vehicle to Park if the driver’s seatbelt is unlatched and the driver’s side door opens while the vehicle is in another gear, or having a warning sound go off under these same conditions to alert the driver. Vehicles, like the one in our case example, that are equipped with electronically controlled parking brakes can also be programmed to engage the parking brake if these circumstances are seen by the vehicle’s control units. Either of these systems can guard against the hazard of an unintended vehicle in motion.

The vehicle experts at Robson Forensic are more than just mechanical engineers and reconstructionists, they are automotive engineers with industry experience in design, development, and manufacturing. Our experts have designed, fine-tuned, and incorporated driver aids and semi-autonomous systems into modern passenger vehicles.

Steven is a vehicle engineer with more than thirty years of experience and has worked directly for automotive manufacturers and tier 1 automotive parts suppliers. He provides investigations, reports,… read more.

In this article, the automotive engineers at Robson Forensic provide an introduction on the capabilities and limitations of vehicle EDR (black box) data. Automotive Event Data Recorders The Event Data…

How often do drivers use their vehicle’s parking brake and in which situations are they most likely to use them? In this research project, the automotive engineers at Robson Forensic sought to…

In the design of an automobile, Automatic Emergency Braking (AEB) and Forward Collision Warning (FCW) systems are installed to increase safety by reducing the severity of rear-end collisions, or even…