In this article, the automotive engineers at Robson Forensic provide an introduction to vehicle restraint systems and how forensic experts inspect these systems as part of an investigation. 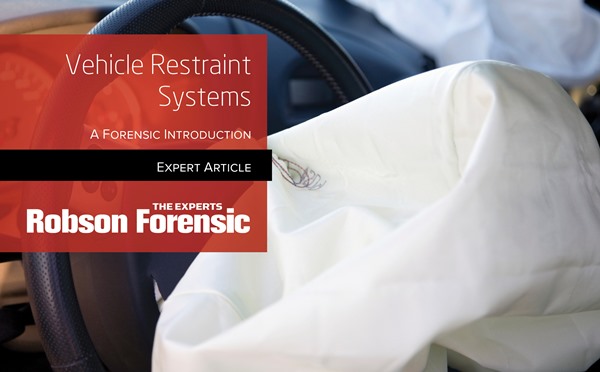 Restraint systems and the vehicle structure are both key elements to vehicle crashworthiness. If there is little to no intrusion into the occupant area, the best way to limit injuries is to restrain the occupants as quickly as possible. During a collision, a vehicle will rapidly change direction and/or speed. During this “crash pulse”, occupants will continue moving at the pre-impact direction and speed. The purpose of restraint systems are to:

Seatbelts are still the most important restraint device. Today’s lap/shoulder seatbelts are quite advanced compared to the early days of lap only belts. Seatbelt retractors must lock before the webbing extends ~1 inch whenever the retractor is subjected to an acceleration of 0.7 G (similar to hard braking on dry pavement). Modern seatbelts typically include pre-tensioner devices which stroke ~2” to remove seatbelt slack early in the collision. Mechanical load limiters are often installed inside the seatbelt retractor to “payout” webbing during the crash, reducing belt loads on the occupant.

In the future, you will likely see seatbelt retractors with electric motors providing both pretensioning and load limiting functions. The 2011 Ford Explorer offered the auto industry’s first rear inflatable seatbelts. These inflatable seatbelts increase the effective seatbelt width during the crash which reduces loads on the occupant. It is the deceleration forces (loads) that cause injuries.

Airbags are generally classified as “frontal”, “side”, or “curtain”. Frontal airbags are typically installed in the 1st row and include driver, passenger, and more commonly knee airbags. Side airbags can be located in the seat or door and offer head/thorax protection. Curtain airbags are installed in the roof to provide head protection during impacts and retain occupants during rollovers.

The two main components of an airbag are an inflator and a cushion. An inflator is a pyrotechnic device which generates gas to fill a cushion. The cushion (or bag) is constructed out of a nylon material and sewn or woven into shape. Inflator outputs and cushion size/vents are tailored to adjust performance. Frontal airbags inflate in ~30 milliseconds, or 0.03 seconds.

Accelerometers and predetermined thresholds are utilized to determine if and when to deploy airbags. Direction and duration of impacts are important factors for this decision making process. Although deployment thresholds can vary, frontal airbags typically deploy during collisions when the longitudinal change of velocity exceeds 10-16 mph. In side collisions, the occupant has a smaller crush zone and side airbags often utilize lower thresholds.

From complex crash reconstruction to developing demonstrative evidence for court testimony, the transportation experts at Robson Forensic are well equipped to assist in your investigation. Our experts have in-depth knowledge of how vehicles are designed and built, they are fluent in the regulations affecting trucking operations, and have designed, built, and maintained our nation’s transportation infrastructure. For more information visit our Vehicles & Roadway Systems practice page.