In this article, Marine Operations Expert and retired Master Mariner, Hendrik Keijer discusses the potential hazards that passengers, guests, or even crew, may face when embarking (getting aboard) or disembarking (getting off) a vessel.

The marine experts at Robson Forensic are regularly retained to investigate incidents involving passengers and crew who are injured in the process of boarding or disembarking ferries, cruise ships, and other vessels. 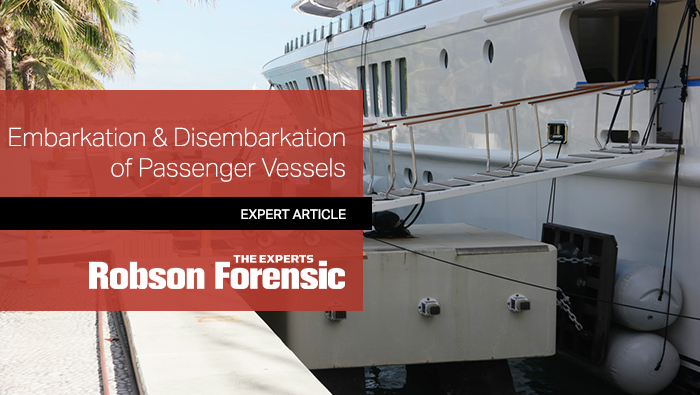 Who is Responsible for the Safe Embarkation
& Disembarkation of Vessels?

The type of vessel, the mooring arrangement, and a person’s boating experience will all influence the risk associated with moving people from land to vessel, or vice versa. Ultimately, a vessel owner and/or operator is responsible for guest/passenger safety even before they get on board.

A vessel’s docking or mooring arrangement affects the embarkation and disembarkation for those who are boarding or departing the vessel. To ensure a safe transition, the vessel crew should inspect the condition of the pier/dock to help identify dockside hazards that can be mitigated. Positioning crew member(s) shore side to assist passengers while they are on moving floating docks, transitioning onto ramps, and providing necessary guidance, are a few examples where diligence may help prevent mishaps.

Vessel Movement Alongside a Dock

Embarking and disembarking a vessel cannot be compared to anything one encounters on land. When a vessel moves, the gangway connected to the vessel will also move. When a vessel is afloat, even when it is tied up (or moored), the vessel is subjected to forces from wind, waves, and load (how much weight is on board, and where on board it is located). The vessel’s response to the those loads needs to be taken into account when determining gangway arrangements. What is referred to as the “six degrees of freedom” (roll, sway, pitch, yaw, surge, and heave) needs to be considered, and how any restraints to those degrees of freedom, from mooring lines, for example, will potentially affect the gangway arrangements. 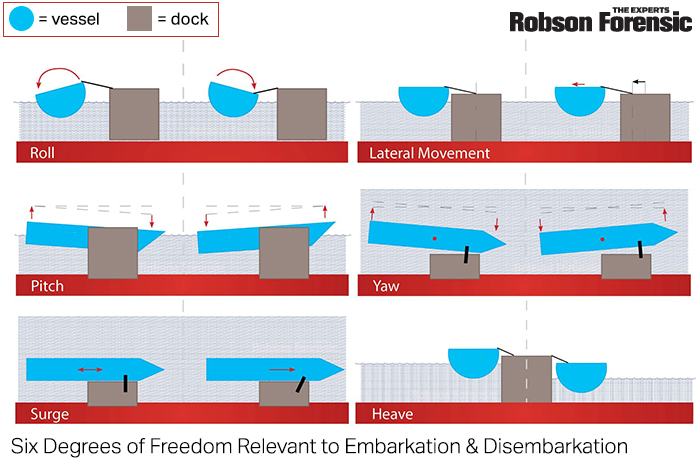 Movement of a Floating Dock

Not all dock platforms are steady. Passengers should be made aware when they are to transition onto, or from, a floating dock. Floating docks are subject to motion caused by various factors such as rocking boats, wind, waves, and wake caused by passing vessels.

An unsteady platform will require vigilance by a vessel operator to provide precautionary safety measures for passengers extending to the dock area.

Particular attention and assistance are recommended at the following points of transition:

The level between a dock and a vessel’s entrance is rarely even.

The height difference is dependent on the movement of a vessel, the location of the embarkation door, and tidal fluctuations which take a vessel up higher during high tide and lower during low tide. 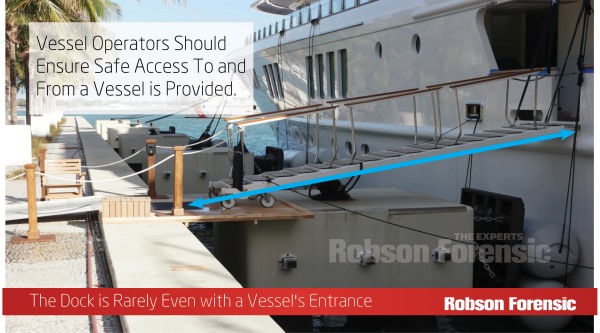 A gangway can be used to bridge the gap between a dock and a vessel. Gangways differ in size and design and are dependent on the type and design of a vessel and dock layouts. Regardless of the design of a gangway, vessel operators should ensure safe access to and from a vessel is provided.

Platforms or steps are used to facilitate the embark/debark process to provide an even level between a boat and the point of embarkation/disembarkation aboard. Steps are often used when a dock does not provide enough space for a ramped gangway.

The platform on the top of the step can be combined with a short gangway. On some occasions no means are utilized to span the gap between a platform and a vessel with passengers having to step across the gap. In this case it is advisable to provide assistance and inform guests of the dangers. 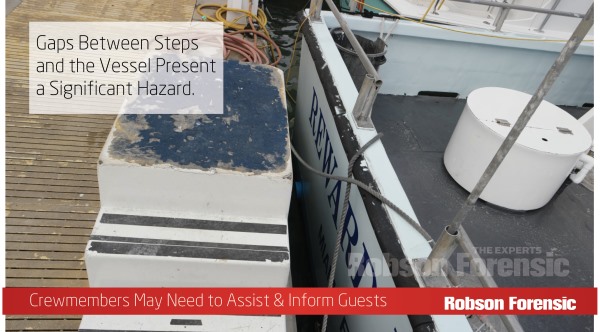 Lines of guests may form at gangways. Gangways should be chosen with this in mind, and employees need to have an understanding of the limitations of their gangways. It is important to understand that only a certain load can be placed on the gangway. This means crowd control will be required when lines form.

Fishing Charters often depart in the early hours of the morning. Other forms of passenger transport by vessel, such as ferries, often operate during hours of darkness. Proper lighting at a gangway or step/platform setup may be advisable.

Ferries, casino boats, cruise ships, fishing charters, recreational boats and other types of vessels carry passengers who are not necessarily familiar with the motion of a boat on the open water, and they may lose their balance. This imbalance can lead to “land sickness.” The persistent feeling of a rocking motion and sense of imbalance can persist shortly after disembarking a boat even on steady ground ashore.

The erratic movement of a vessel alongside a dock, combined with possible imbalance of disembarking guests, makes it imperative that proper precautions are taken by vessel personnel to ensure passengers safely transition to the dock.

Safe access to and from a vessel requires diligence from boat operators and their owners. Some of the major safety enhancements are outlined below.

Safety nets provide an additional barrier between the gangway and the water. The space between a dock and a vessel can be wide or it can be small, and it is affected by the size of the fenders used by the boat and/or the fenders of the dock itself.

Vessels can sway significantly whilst alongside. Especially when swells and waves enter harbors in certain weather conditions but also when other vessels pass by. When vessels sway they move away from the pier in one instance and move back the next, during these movements they may also move up, down, forward and backwards. The lines used to tie up vessels are subject to stretch and allow this movement to occur. A vessel needs to be safely moored with its lines taut to minimize this movement. A gangway connected to the vessel will move when the vessel moves.

The photograph below shows wheels installed under a gangway to facilitate back and forth movement with a vessel. Unsuspecting passengers will not be able to judge when a gangway will roll towards their feet. This can present a dangerous condition and adequate staffing is highly recommended. 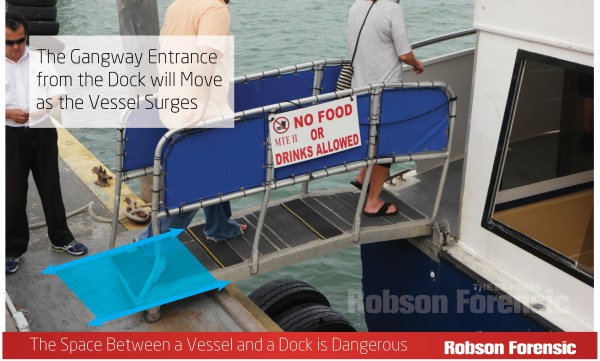 When a few tons of vessel surges back to the dock it will compress the fenders and the gap between the pier and dock may decrease significantly. In some instances, the hull of a vessel may touch the dock face which could consist of pilings or worse, a concrete wall face. One can imagine what would happen if a person landed in the water between the vessel and a dock in these conditions.

The water and space between a ship and a dock is a dangerous area and preventative safety precautions such as the proper placement of netting under a gangway are advised.

Proper railings on a gangway should be provided for safety reasons. They should be of sufficient strength and height and able to withstand the force of a passenger losing his or her footing and seeking hold of the railing. The following photograph depicts a hazardous condition to those boarding or disembarking due to the lack of a handrail. 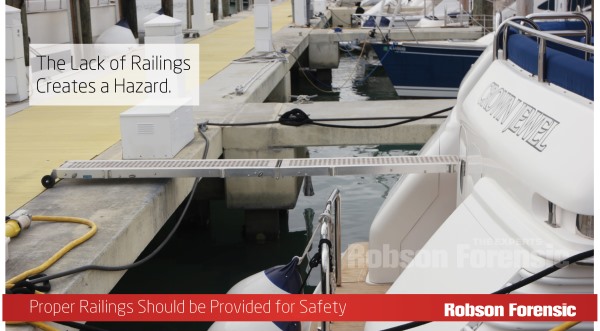 The steepness of a gangway needs to be taken into account when assessing the safety of a boarding arrangement. The slope of a gangway will change due to tidal fluctuations, is dependent on the length of the gangway, and will vary with the movement of a vessel. An anti-skid surface should be part of a safe gangway. 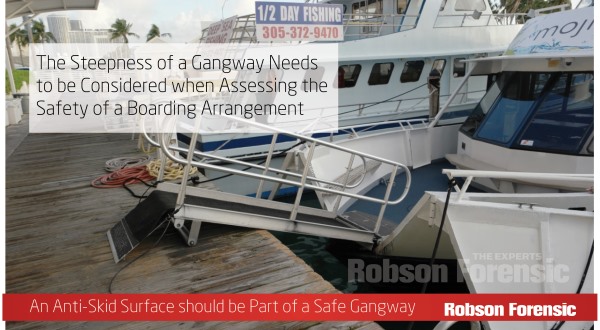 Gangways and points of embarkation to and from vessels have been identified as potentially hazardous by various regulatory bodies. Standards for gangways apply to USCG inspected and certificated vessels.

The recreational boating sector remains unregulated with regards to safe vessel access. However, this does not take away a Captain’s responsibility of ensuring the safety of his passengers and crew.

The Maritime Practice Group at Robson Forensic is uniquely qualified to investigate and reconstruct marine mishaps and other incidents that occur on or around the waterfront.

Among our ranks you can find marine safety experts and digital forensics experts from the U.S. Coast Guard, veteran engineers, and ship captains from the Merchant Marine, as well as esteemed professors from the nation’s leading maritime universities.

For more information, contact the author of this article or submit an inquiry.

In this article, Marina and Boatyard Expert, Carl Wolf discusses some of the many premises safety issues that arise in marinas and other waterfront facilities. This article was originally published in…

Failure to properly distribute the weight load on boats, including where your occupants are located, can have catastrophic consequences. Overloading, or improperly loading, a boat may lead to…