A vessel is deemed seaworthy when it is determined to be reasonably fit for her intended use. The Titanic was a passenger cruise liner which was intended to be used to safely carry passengers and crew. The Titanic was unseaworthy since she provided insufficient lifesaving capacity. Unseaworthiness does not necessarily result in the sinking of a vessel.

This article discusses how proving, or disproving unseaworthiness through a thorough forensic investigation can be powerful in maritime litigation. 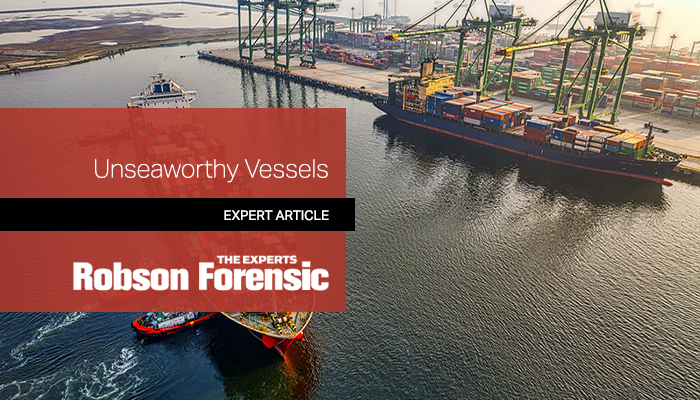 Unseaworthiness may take on numerous forms, from a material defect to an unreasonably prepared or executed voyage plan with possible resultant consequences such as running aground. Vessels are complex structures, with even more complex requirements to accomplish seaworthiness. Unseaworthiness can be the result of a multitude of conditions and circumstances, far beyond what can be covered in a single article. A vessel may be deemed unseaworthy due to a lack of anti-skid material on deck, a hazardous gangway, a lack of Personal Protective Equipment (PPE) or a drawer in the galley (kitchen) which cannot be secured, and slides open during heavy weather.

A reasonable company and/or operator would ensure a vessel is seaworthy before it heads out to sea. For a vessel to attempt to be seaworthy, standards of care, regulations, and guidance should be followed. One example could be ensuring that a vessel is watertight. Securing a vessel for sea is especially important when adverse weather is expected.

Another example of unseaworthiness could be Master-Pilot exchange and/or Bridge Team communication challenges. A review of Bridge Resource Management (BRM) may shed light on how a bridge team is expected to reasonably function. If unseaworthiness is the result of a failure to follow BRM principles, an investigation into the incident would seek to answer questions such as:

It is not uncommon for bridge team members to be trained in BRM principles on simulators which involve pilot interaction. Teams may be trained to identify mistakes made by other team members and take corrective action, and possibly avoid disaster. How are mistakes made by pilots with decades of specialized experience corrected by junior Officers for example? A company which does not provide reasonable BRM training may open itself up to unseaworthiness claims of the vessel(s).

The Collision Regulations require mariners to utilize all means available:

“Every vessel shall at all times maintain a proper look-out by sight and hearing as well as by all available means appropriate in the prevailing circumstances and conditions so as to make a full appraisal of the situation and of the risk of collision.”

A vessel could be deemed unseaworthy when not all means, such as an under-keel-clearance alarm, were appropriately utilized to make a full appraisal of the situation. The question of whether an operator, who is aware that a depth alarm is not activated or properly set, would set out on a voyage through waters that contain shallow depths demonstrates the reasonableness of such actions/inactions.

The Collision Regulations also require proper use of radar equipment:

“Proper use shall be made of radar equipment if fitted and operational, including long-range scanning to obtain early warning of risk of collision and radar plotting or equivalent systematic observation of detected objects.”

A vessel could be deemed unseaworthy if the path predictor on a radar is not utilized or improperly programmed. Path predictors may be available on modern commercial radar systems. Radar systems display a vessel’s predicted track in the future. Radar systems may be capable of predicting where a vessel will be in 3 minutes time, for example, if a certain rate of turn and speed are maintained. It could present an operator with oversight to the proceedings of a starboard turn and whether a vessel is turning too fast, too slow, and if a vessel’s speed will affect a planned turn.

A vessel not following a pre-planned turn may end up in an undesirable position such as shallow water, or on a harbor entrance’s breakwater.

The following figure shows a possible radar path predictor. This example shows a vessel’s present position, marked A. The subsequent vessel displays are the predicted movement along a predicted (red) track. The vessel intends to follow her voyage plan and follow the green line. However, the predictor as shown in the subsequent positions shows the vessel proceeding along the red line if her present rate of turn and/or speed are maintained. Without intervention to the present proceedings the vessel may not follow the planned green line and end up in an undesirable situation. 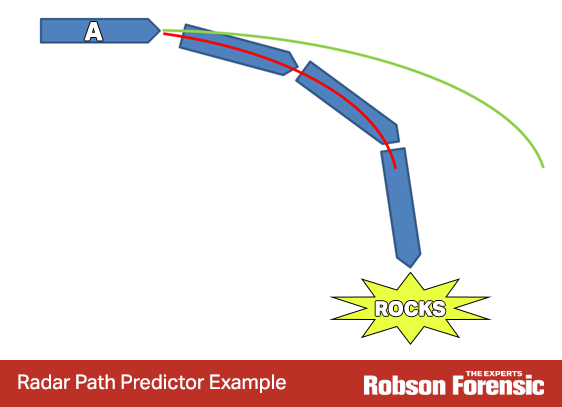 Navigation equipment settings may assist operators in the safe proceedings of a vessel and could be studied during a case investigation, to determine if the actions/inactions of operators with regards to use of equipment features affected seaworthiness.

A complete voyage plan should commence at the berth of departure and conclude at the berth of arrival. A well-trained and effective bridge team should be familiar with such plan able to identify errors. A voyage plan not executed correctly, or a voyage plan based off of incomplete information (ex: made using an out of date nautical chart), are examples of unseaworthy conditions.

The Maritime practice at Robson Forensic is made up of experts from every facet of the industry, from mariners to marine engineers, naval architecture and experts with on-board and on-shore maritime backgrounds. They are frequently retained to investigate collisions and other mishaps that occur on and around the water. From commercial shipping to recreational boating and everything in between, the maritime industry is multi-faceted and diverse. Our experts have the education, training, and hands-on experience to investigate the matter at hand.

An effective and skilled ship’s navigation team, subject to applicable requirements, should be well versed and trained in Bridge Resource Management (BRM). During any investigation where an…

A version of this article was published in the ABA TIPS Admiralty & Maritime Law Spring 2022 Newsletter. The PDF is available for download at the link on the side of this page. GPS units and…