The plaintiff in this case broke his arm while attempting to exit the run-out at the end of a waterslide. Robson Forensic aquatic safety expert, Maria Bella, AFOIT, CPOI, LGI, was retained to determine if the waterpark operated the subject waterslide in a manner that caused this incident. 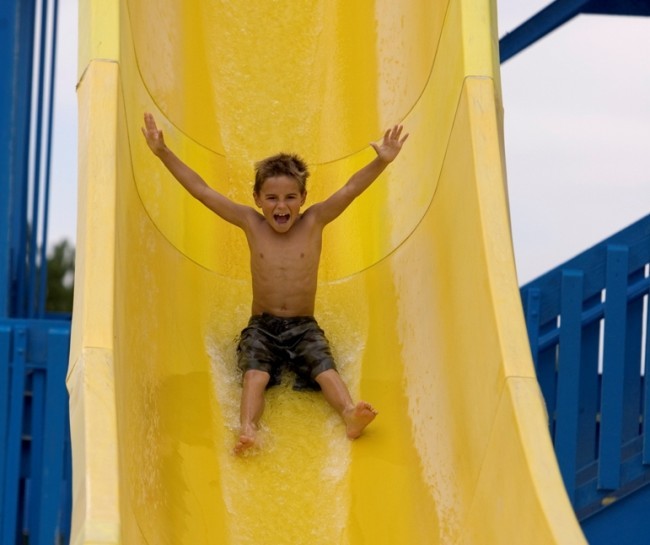 A physician broke his arm while attempting to exit the run-out at the end of a waterslide. After the victim completed his descent of the slide, he rose to his feet and was struck by the following rider; his legs were knocked out from under him and he fell upon the edge of the waterslide, fracturing his humerus.

Robson Forensic aquatic safety expert, Maria Bella, AFOIT, CPOI, LGI, was retained to determine if the waterpark operated the subject waterslide in a manner that caused this incident.

The subject waterslide has two serpentine slide flumes that dispatch from a common platform. Riders enter the slides via entry tubs that are positioned perpendicular to each other at the corner of the platform opposite from the access stairs.

A lifeguard is stationed in the corner between the slide entry tubs and is responsible for dispatch on both slides as well as general safety on five interactive water play features on dual adjacent decks. Lifeguards are trained to watch each patron descend the waterslide while standing with an outstretched arm to prevent riders from descending the adjacent slide prematurely.

According to the World Waterpark Association, collisions in flumes are the primary risk on waterslides. Maria Bella demonstrated that it was unreasonable to expect a lifeguard to control slide dispatch when their attention is focused on patrons outside of the loading zone. She also cited comparable waterparks that utilize physical barriers to regulate access to slide entry tubs. By stationing a single lifeguard in a play zone with five interactive water play features and two waterslides, the waterpark reduced the quality of supervision provided at the top of their waterslide, and created an environment in which patron safety was compromised.

Forcing distraction on the lifeguard invited children to behave in risky ways, such as descending the waterslide before the lifeguard gave them permission to do so. Maria Bella effectively established that the waterpark violated the standard of care in the operation of their waterslide and created a dangerous condition that caused the plaintiff to be injured; they failed to establish adequate protocol to prevent collision between waterslide riders; and failed to provide written instructions and warnings for the waterslide on which the incident occurred.

Maria Bella is an expert in sports and recreation and specializes in aquatic safety. She is one of only six Aquatic Facility Operator Instructor Trainers in the world and has been active in the… read more.

A patron at a local amusement park was injured when he dove from an elevated board into a swimming pool and struck the pool bottom with his face. He sustained an abrasion to his forehead and…

In this article, Robson Forensic experts in Industrial Hygiene and Aquatics Safety discuss some of the issues relevant to air quality in indoor swimming areas. Indoor Air Quality in Natatoriums Cella…

In this article, aquatics expert, Maria Bella, AFOIT, CPOI, LGI, provides an introduction to the safety standards relevant to pool fences. Swimming Pool Fences The illustration below represents a…