Many forensic cases involve objects that fell from an elevated position and were affected, in some part, by the wind. Whether the end result was injury or property damage, there is frequently some dispute over the direction, force, and path of the falling object.

In this article, structural engineer Mark Duckett provides insight on the process of reconstructing these incidents through the lens of a particular incident. 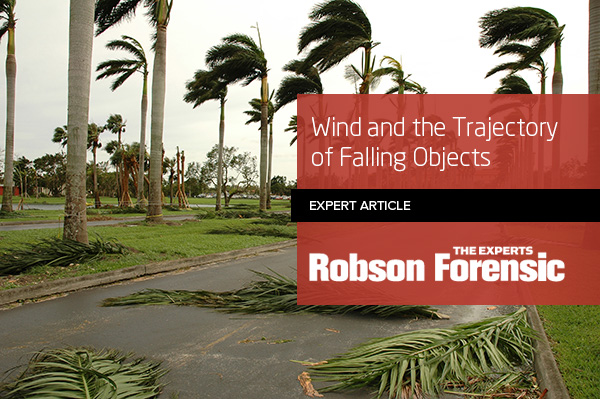 Wind and the Trajectory of Falling Objects - Expert Article

In this article, we examine the reconstruction of falling objects through the lens of an incident in which a tree failed during heavy storms and fell upon a moving vehicle. The tree in this incident was a palm, which provides different aerodynamic qualities than other trees, but the same scientific approach can be applied to any object, including signs, tents, and building materials.

The plaintiff in this case was driving eastbound on the north-most lane of a highway in which the landscaped median included large Medjool palm trees. While driving, the head from one of the palms detached from its trunk and fell into the path of his vehicle, causing damage to the vehicle and injury to the plaintiff.

Conditions on the date of the incident consisted of severe weather; heavy rains, hail, high wind gusts and severe flooding. In order to strike the plaintiff’s vehicle in the manner claimed, the palm head not only fell about 25 feet downward, but also moved approximately 16 feet horizontally from its position near the center of the median.

Structural engineer, Mark Duckett was retained to determine the likely cause of the horizontal displacement in the trajectory path of the falling palm head.

Isaac Newton proposed three basic laws of motion in 1687 that remain valid today and are relevant to the reconstruction of wind events.

Simply stated, the first law states that an object at rest remains at rest unless acted upon by an outside force. Similarly, his second law states that the acceleration of a body is directly proportional, and in the same direction, to the force acting upon that body and inversely proportional to the mass of that body… in other words, F=Ma where F is the force acting on that body, M is the mass of the body and a is the acceleration of the body (in the direction of the force).

For the detached head of the palm to translate or move horizontally any appreciable distance, it would need to be acted upon by a force in that direction. Weather data obtained for the afternoon of the incident verified that heavy winds were generally moving towards the south. The plaintiff’s vehicle was struck by the palm head approximately 16 feet south of the tree from which the detached head fell.

Calculations performed by Mark Duckett, P.E., S.I., using kinematic equations derived from Newton’s Laws of Motion, confirmed that the detached head of the Medjool palm was acted upon by a wind gust during its descent, blowing generally in the south direction. The wind gust imparted a force upon the detached head that resulted in the horizontal translation from its initial position near the center of the median to its final position near the center of the north-most vehicular lane on MacArthur Causeway.

The wind gust responsible for imparting the force that ultimately caused the horizontal movement of the detached palm head was calculated at approximately 35 miles per hour.

Understanding the timing, magnitude, and direction of wind forces is relevant to a broad range of legal disputes. Our engineers have experience reconstructing these variables in cases involving building damage, marine incidents, premises liability, motor vehicle crashes, and more.

Please contact the author of this article, or submit an inquiry to discuss your case with a relevant technical expert.

In this article we explore the engineering issues associated with the load requirements of atypical structures, referred to in building codes as other structures. Investigating an Atypical…

In this article, structural engineer, Mark Duckett discusses building demolition and the concept of “reverse” construction. Building Demolition Remember the game Jenga? In that game,…

In this article, structural engineer, Mark Duckett, P.E. discusses roof failures associated with snow loads. Topics of discussion include reasonable loads that roofs are designed to support and the…