This case involved a plaintiff who was injured when a front leg of the chair she sat upon gave way, causing the chair to pitch forward. As a result of the failure, the plaintiff fell to the ground and was injured. Les Winter, P.E. of Robson Forensic was retained to investigate the incident and determine the cause of failure. 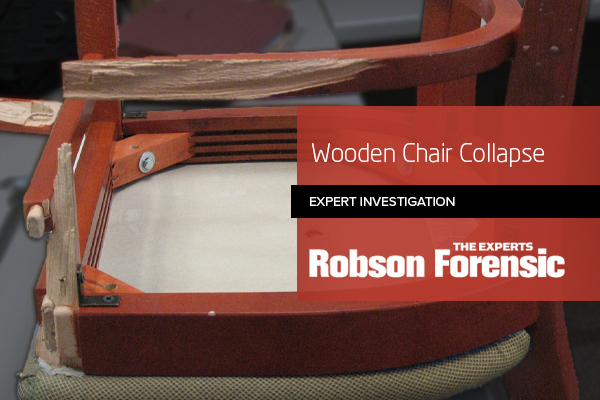 Description of the Incident

Robson Forensic was called upon to perform a forensic investigation to determine if the subject chair was dangerously defective in a manner which caused the plaintiff’s injury. The plaintiff placed a tray of food on a table, pulled the subject chair out and was settling into it, when the front left leg collapsed. She fell forward and the chair back struck her from behind. She fell to the ground and was injured. The plaintiff did not notice anything abnormal or damaged about the chair before sitting in it. The chair was one of many similar chairs in the dining room.

The injury occurred when the front left leg of the chair broke, folding inwards, below the seat, causing the chair and the plaintiff to be pitched forward. The wood failure began at the top of the leg and propagated downward.

Joinery is the primary method which connected the chair leg to the chair rails. The joinery type employed is known as mortise and tenon. 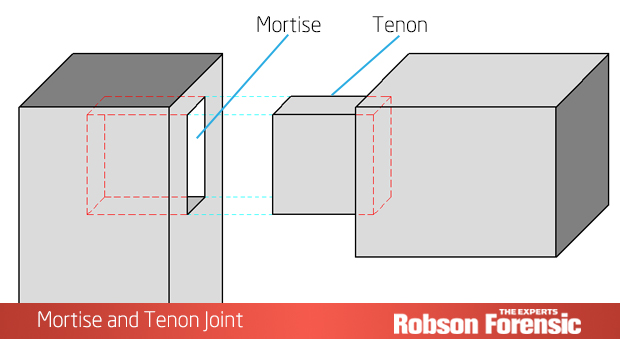 A mortise and tenon joint is held together by adhesive (“glue”). In order that the resulting joint stays together, and the leg remains firmly connected and braced to the rails, glue must be applied so that the mating surfaces are fully coated (“wetted”). Joints which are not fully wetted are referred to as “starved” and cannot be relied upon.

It is well known in the woodworking field that the combination of close-fitting mating surfaces of joints and an adequate amount of correctly-applied glue is necessary for a reliable mortise and tenon joint.

Expert Investigation of the Incident Chair

While investigating the incident chair, hand pressure applied to the rear legs resulted in movement between the legs and their rails. This movement indicated loose mortise and tenon joints at these locations. Nearly all of the wood surfaces that formed the mortise and tenon joints, (and should have been glued), were bare wood. It was found that almost all of the glue was pooled at the bottom of the lower front mortise without being spread on the mortise side walls. The tenon had very little glue applied to its sides. Properly glued joints would have been tight. Like the front leg which failed, the loose condition of the rear legs was most probably the result of glue-starved joints. Three other chairs from the same dining room which had been set aside due to defects were similarly examined, and each had at least one leg which was dangerously loose.

Through this investigation, Mr. Winter concluded that the subject chair was improperly assembled by the company that had assembled and then sold it to the dining room owner. The failure to provide safe and secure mortise and tenon joints, and to properly and adequately apply glue to the mating surfaces in the subject chair is a manufacturing defect and was a cause of the injury. These defects rendered the subject chair unreasonably dangerous and unsuitable for its intended purpose. Adequate techniques which provide safe mortise and tenon construction have been long known within the industry, and it would be reasonable for the company assembling the chairs to construct them properly.

Visual inspection of a failed chair will often provide definitive evidence of the cause of failure and condition of the chair leading up to the time of collapse. Examination of the snugness of fit between mortises and tenons, uniformity of adhesive applications, and other visual cues provide telltale signs regarding the adequacy of design, quality of craftsmanship, and sufficiency of any repairs performed throughout the life of the chair.

In this article, Professional Engineer and Woodworking Expert, Les Winter, P.E. discusses the causes of wood chair collapses which commonly lead to fall injuries. The experts at Robson Forensic have…

In this article, woodworking machinery expert, Les Winter, P.E. discusses jointer injuries. His discussion includes an overview of the machinery, an explanation of the most common injuries associated…

In this article, woodworking safety expert, Les Winter, P.E. describes the various processes and equipment that are necessary to safely operate a table saw. Les regularly applies this information to…