This article discusses the human factors behind autonomous vehicles; it provides an overview of the various levels of vehicle automation and also discusses some of the challenges involved in transitioning vehicle control back and forth between human and computer. 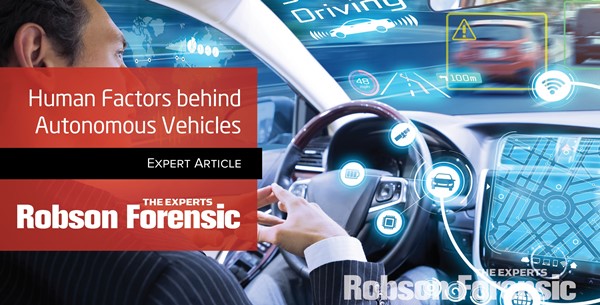 Vehicle manufacturers such as Tesla, Mercedes, and Audi as well as ride-sharing companies such as Uber have already released or are preparing to release semi-autonomous vehicles onto public roadways in the near future. At this time, none of these vehicle systems operate without at least some level of human interaction required under various conditions. From a human factors perspective, that begs the question as to whether the systems being placed onto public roadways have been designed in a manner that is consistent with known driver capabilities and limitations that allow a driver to maintain situation awareness and safely intervene when necessary.

NHTSA defines automated vehicles as those in which at least some aspects of a safety-critical control function (e.g., steering, throttle, or braking) occur without direct driver input.1 Different levels of vehicle automation require drivers to perform different tasks while interacting with the vehicle. For example, according to NHTSA’s preliminary statement concerning automated vehicles, Level 1 automation requires the driver to be physically operating the vehicle with either their hands or their feet at all times although some driving assist features may be included in the vehicle. Level 2 automation requires the driver to monitor the roadway and to be available for control at all times and on short notice. With Level 3 automation, the driver is not required to monitor the environment, but the driver is expected to be available for control at all times with sufficiently comfortable transition time. At Level 4, the driver will provide destination or navigation input, but is not expected to be available for control at any time during the trip. At Level 5, the driver may have the option to control the vehicle, but the vehicle is capable of performing all driving functions under all conditions.2

For all levels of automation, two of the most important tasks for drivers are (1) monitoring the automated systems to make sure they are performing as expected and (2) intervening (resuming control) in situations that the automation cannot handle.3,4 Automated vehicle features are often intended for use only under certain conditions (e.g., on highways, in clear weather, etc.) and, therefore, suffer from “brittleness.”5 Brittleness means that the automated features of the vehicle function well under the conditions during which it was intended to be used, but the system requires human intervention to handle situations that the software was not designed to handle. This creates a challenge for the human driver who may not realize that the automation is not performing correctly or not understand why the automation is not performing correctly. Human factors research on automated systems has shown that people are slow to detect a problem with automation and slow to understand the problem after it is detected. When automation failures occur, unexpected automation transitions that require a driver to take over or resume manual control of the vehicle will occur suddenly and the driver may not be ready to take over. 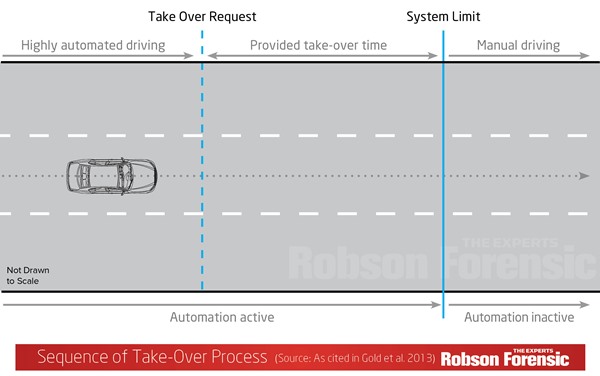 Vehicle automation negatively affects mental workload and situation awareness. As a result, perception-reaction time increases as the level of automation increases. In fact, recent research indicates that the braking reaction time of drivers using Level 1 and Level 2 automation is up to 1.5 seconds longer than drivers who are manually operating the vehicle.6 Perhaps even more importantly, higher levels of automation breeds complacency that induces drivers to engage in non-driving-related tasks such as talking on a cell phone or reading from a tablet.7,8 Furthermore, as the level of automation increases, so does the likelihood that drivers will engage in non-driving-related tasks. Those drivers who are engaged in secondary non-driving-related tasks may need more time to regain situation awareness, reenter the driving control loop, and successfully respond to a takeover request. In fact, depending on the secondary task being performed, a driver can take as long as 25 seconds to successfully take over. Therefore, it is critical that semi-autonomous systems be designed to accommodate drivers who take the longest to intervene, not the “average” driver.

A driver’s ability to intervene and avoid a collision after vehicle automation fails is dependent upon the driver’s level of situation awareness and workload as well as the roadway conditions and the time available to avoid a collision. A driver must either realize that the driving situation is beyond the capabilities of the automation on their own or be alerted to that fact by the vehicle user interface. The driver must then have sufficient time to take over manual control of the vehicle. The time needed for takeover depends on the complexity of the driving situation and how long the driver needs to gather information from the driving environment and formulate an appropriate response.9,10 Furthermore, the time available to avoid the collision is a function of the range of the system’s sensors and their ability to predict automation failure and the need for human intervention.

As the driving task becomes more automated, the role of the driver is changing. As a result, investigations and analyses of crashes involving automated features or semi-autonomous vehicles must account for the changing role of the driver. For the foreseeable future, crashes involving semi-autonomous vehicles will require a human factors analysis and investigation to determine whether the driver’s actions (or inactions) were a factor in the collision and whether the system was designed in a manner that is consistent with the known capabilities and limitations of drivers operating these systems.

For more information about the human factors issues of semi-autonomous vehicles, please submit an inquiry.

This article provides an introduction to the science of human factors and the concepts utilized by human factors experts to design products and environments that minimize human error related mishaps.…

This presentation provides an overview on the human factors of distracted driving. The available slides discuss visual, manual, and cognitive distractions along with the safety implications of…