In this document, airport engineer Gus Ubaldi, P.E., provides an introduction to common issues that arise in airport expansions along with insight from his decades of experience. 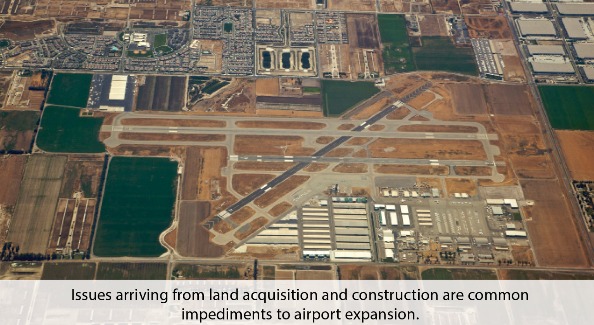 Airport expansion is a natural outcome of a robust economy. Expansions allow airports to attract new aircraft and permit existing aircraft to fly farther. However, expansion of an operating airport can be a complicated, arduous task; safety areas surrounding the airport must often be revised to provide adequate protective areas, which may require additional land. Obstructions may need to be removed. Even after construction has started there may be issues with airport operations or the quality of the construction. These issues can create disputes between airports and property owners, or airports and contractors. The disputes can result in litigation, often requiring the involvement of an expert in airport engineering.

Land Acquisition More space for ramps, terminals, hangars, longer runways and safety areas surrounding the airport may require the acquisition of additional land. FAA regulations require that the airport “has control” over the land for these purposes. Common Questions: Are the land needs consistent with the proposed improvement and FAA requirements? What is the proper interpretation of the FAA’s requirement to “have control”? Would an easement be a “sufficient property interest” instead of outright purchase? Obstruction Removal Often, airports need to remove obstructions to flight paths. This requires not only the purchase of land, but the removal of obstructions, ranging from trees to roads or houses. Common Questions: Are the obstructions to be removed consistent with FAA requirements? Is the proposed action (removal versus marking) reasonable? Construction Airport construction is unique in that detours are not always practical; if a local airport is closed for construction, driving to the next closest airport may negate the utility and convenience of flying altogether, which may have negative impacts on the regional economy. For example, reconstruction of a runway requires closing the runway, which at some locations means closing the entire airport. Not only do businesses located in a closed airport lose access to their customers, but local businesses that rely on the accessibility of air travel may also lose access to business opportunities. Because of the economic importance of airports, it is imperative that construction phasing is well planned to minimize airport downtime, that contractors diligently pursue completion, and that the resulting construction stands the test of time. Common Questions: Is the construction phasing consistent with FAA requirements and airport needs? Did the airport make a reasonable effort to allow the contractor to complete on time? Was the design deficient or did the contractor provide poor workmanship? _______________________________________ Airport expansion can attract additional air traffic and support airport revenue streams. In some scenarios this approach is reasonable and justifies expansion, in others it is less reasonable and is met with just resistance from the neighboring community. Airport construction is unique and specialized. Airport expansion is a complicated subject that often results in conflicts that can be resolved by involving an airport engineer to review expansion plans,land acquisition,obstruction removal, and construction design.