When a bicyclist loses control, the resulting incident investigation is similar to automotive crash reconstruction in that it involves the use of engineering principles and scientific analysis to determine the cause of an incident, and what initiated the loss of control on the part of the bicycle rider. Investigations of this type use evidence regarding vehicle speeds and positions to understand what happened, when and where.

Bicycle falls can be caused by many circumstances: roadway irregularities, bicycle equipment malfunction, a collision with an animal, a pedestrian, another bicycle rider, or a motor vehicle. Additionally, the rider’s familiarity with the area of the incident or the subject bicycle can be a factor in analyzing the fall.

This article outlines the process of reconstructing a bicycle accident, common causes, and circumstances that are evaluated during an investigation. 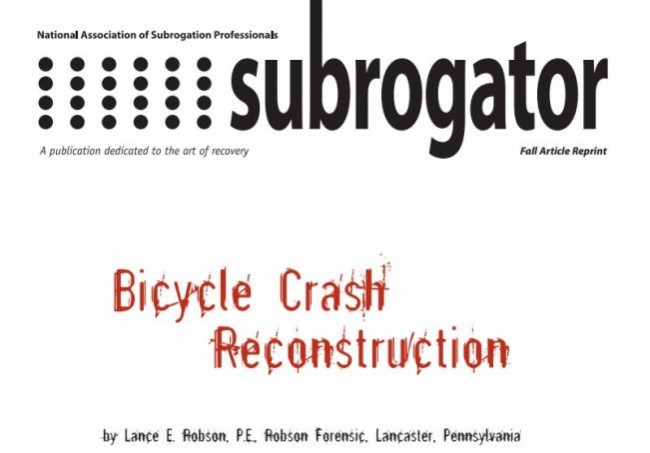 A bicycle crash reconstruction begins with the evaluation of road conditions at the site of the incident. Irregularities in the roadway surface mean different things to bicycle riders than they do to those operating motor vehicles, and these conditions need to be considered when investigating the rider’s actions.

After assessing the road conditions at the site of the incident, any collision avoidance maneuvers employed by the rider are reconstructed. Common avoidance maneuvers include a change in lateral orientation in the roadway, a lane position that prevents overtake by vehicles behind, an increase in speed, a decrease in speed, a full stop on the side of the roadway, even a hop over a hole or surface irregularity. Weather, lighting, wind direction and speed, along with other environmental factors are considered.

The mechanical condition of the bicycle is recorded in order to understand whether some defect contributed to a loss of control. Bicycle components such as tires, rims, brake pads, control cables, and chains are considered wear items and must be replaced and/or adjusted on a regular interval. During a reconstruction, these items are checked and evaluated to determine the bicycle’s condition and how the bicycle rider’s ability to control speed and direction may have been affected.

There are a multitude of circumstances that can cause a bicycle fall:

During an investigation and reconstruction, bicycle and vehicle damage is observed. This physical evidence can sometimes indicate the relative speeds of the vehicles, direction of travel, speed prior to the collision, and more. Debris left behind from the vehicles can provide insight about the dynamics of the incident. Broken plastic from headlights, taillights, reflectors and body panels can be evaluated to determine the direction of forces, and the magnitude of the impact. Items such as eye glasses and hats have been employed to show the area of first contact between a bicycle and a vehicle.

The physical condition of the bicycle can sometimes indicate what gear ratio the rider was using at the time of the collision. From that information, a speed range may be calculated. Marks on the bicycle’s tires and rims can give clues about hitting potholes or other hazards, skidding prior to impact, or punctures. Damage to wheels, frames, forks, and cranks can be so severe as to render the bicycle un-rideable, therefore could not have existed prior to the collision. When an investigation can eliminate the possibility of pre-incident damage, that evidence can be used to inform the analysis of the incident.

One source of data used for reconstruction is photographic and/or video documentation of this evidence immediately after the incident, often times by a law enforcement investigator or an eye witness. Rider, driver (in the case of a bicycle-motor vehicle collision), and witness testimony can give information about times, speeds, positions, and the sequence of events. Though not always available, scene photographs and video footage from CCTV and on-board cameras often help in a reconstruction.

The use of GPS recording devices by bicycle riders is becoming quite common. With the recorded file from a bicycle-mounted computer or smart phone application the speed, location, elevation, heart rate and other data points can be analyzed and plotted. These data can be used to evaluate testimony, and can be compared to motor vehicle data recorders. While witness testimony regarding speed is sometimes imprecise, GPS devices record speed and location as frequently as every second. This information is becoming much more commonly available due to the prevalence of GPS recording devices, both stand-alone and as part of a smart phone’s location services.

Once the rider’s speed at the time of the incident has been determined to a reasonable degree of certainty, it may be necessary to carry out an analysis to determine whether the bicycle rider was operating at a reasonable speed under the circumstances. Circumstances to consider include rider skill level, route familiarity, bicycle type, bicycle condition, roadway condition, time of day or night, and weather.

Among our bicycle experts you will find professionals who worked for some of the most recognizable bicycle brands in the world, engineers who have designed and constructed roads and bicycle trails, and passionate cyclists who use their bicycles for commuting, training, and competitive racing. Our biomechanics group can determine if the quantity and direction of forces are consistent with the injury pattern, the sequence of events, and whether protective equipment would have made a difference to the incident outcome. Similarly, our human factors group can contribute analysis about perception-reaction time, conspicuity and more.

For more information, contact us or submit an inquiry.

In this article, the bicycle experts discuss bicycle frame and component failures, with an emphasis on the failures that are most commonly associated with a loss of control or crash. Bicycle Frame &…