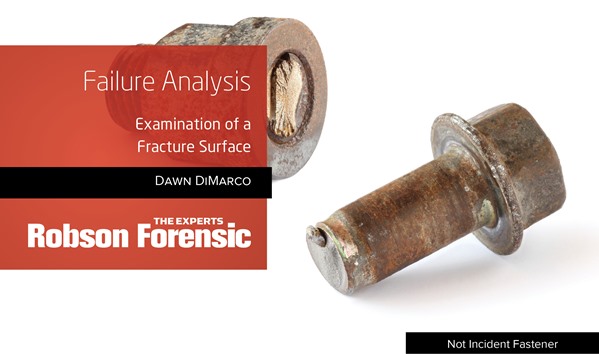 Examination of a Fracture Surface

To the layman, a broken part is just that, broken. To a failure analyst, examination of the fracture surface of a failed component reveals clues regarding the way in which it failed. Let’s look at some fractures and detail the way they are typically evaluated.

A failed component is first examined with the naked eye (macroscopic examination) and then preferably with magnification from 1-50X. The first piece of information often observed is where the fracture initiated, that is, locating the fracture “origin.”Markings on the fracture surface formed during the initiation and propagation of the crack can be used by the experienced failure analyst to evaluate the fracture and determine origin of cracking. Examination of the origin may reveal the cause. 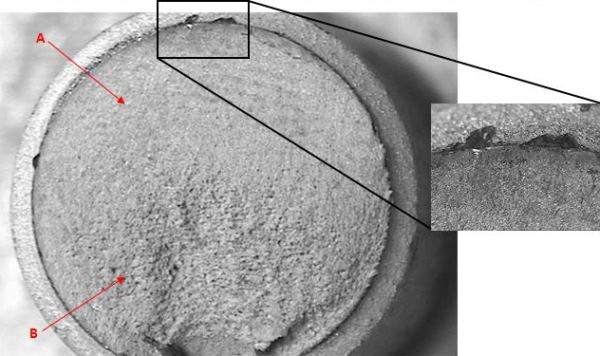 The first example is a fastener subject to rotating load. Visual examination of the lines and features on the fastener fracture in Figure 1 revealed that it initiated on the surface in the root of the second thread. Next, the examiner may ascertain the mode of fracture. Some modes of fracture can leave marks on the surface that can aid in the identification of failure mode and origin. Looking at this fracture surface, it is clear to the experienced examiner, there are two distinct topographies: fatigue (A) and overload (B). Also important is the extent of propagation prior to final fracture. Characteristic patterns on the fracture surface provide valuable information regarding nominal stress, stress concentration, and loading conditions. In the example above, the crack propagated by a fatigue mechanism (topography A) through approximately 50% of the cross-section prior to ultimate fracture (topography B). Lastly, examination of the origin area at magnification can also reveal any contributing factors toward crack initiation. In this case, pitting was observed in the origin area. Pitting acts as an initiation site for fatigue cracks and therefore, in this case, pitting is considered to be a contributing factor toward crack initiation.

Our next example is a fastener that fractured upon installation. Sometimes the fracture surface is not only visually examined but is also evaluated in a Scanning Electron Microscope or SEM. Evaluating the surface for fracture topography can give the examiner an idea of how the crack propagated across the fracture surface. That is, did it propagate through or across the grains (transgranularly) or around/between the grains (intergranularly)? 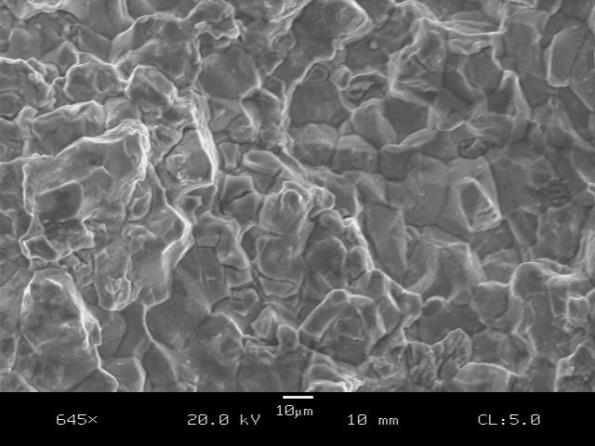 In Figure 2, the fracture topography was predominately intergranular or along the grain boundary with some areas being mixed mode: intergranular and overload as shown in Figure 3. Intergranular topographies are brittle failure modes and are commonly but not exclusively associated with hydrogen embrittlement and stress corrosion cracking. 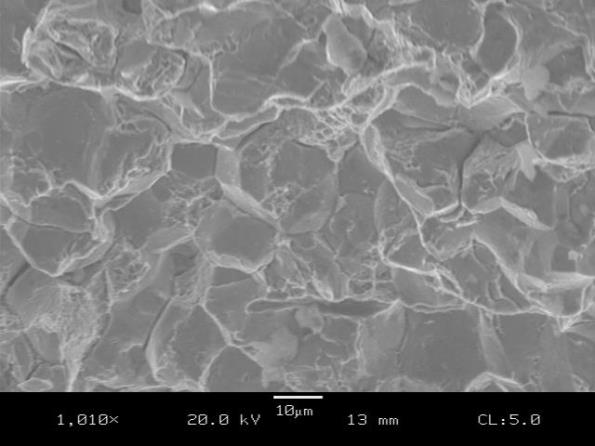 Overload or final fracture, in this case, occurs by a ductile microvoid coalescence mechanism as depicted in Figure 4. Ductile fracture is also sometimes referred to as dimple rupture. 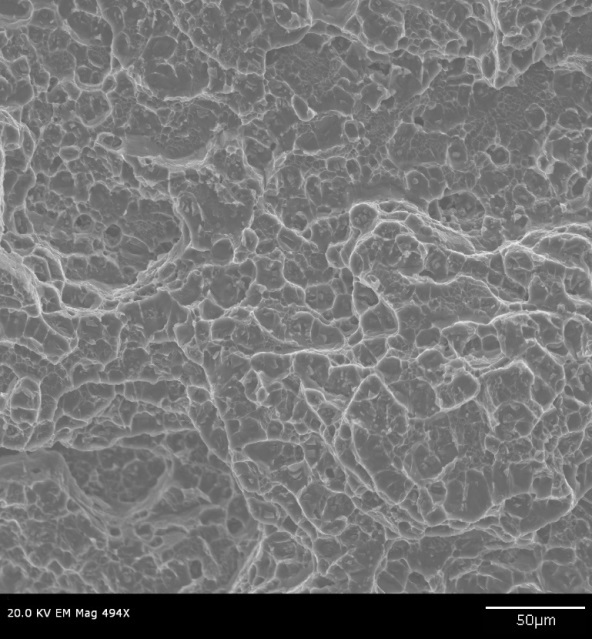 Examination of the fracture surface both visually and with magnification can give the examiner a picture of how the crack initiated, how the fracture propagated and if any contributing factors can be identified.

The experts at Robson Forensic apply a rigorous scientific approach to determine the failure mode as well as how the failure occurred, how the failure appeared over time, and whether the failure was due to misuse, a material defect, a manufacturing defect, or a design defect. We conduct these investigations involving a broad range of materials, products, and industries.

Dawn DiMarco is a career Metallurgist with extensive experience in failure analysis, metallurgical consulting, electron microscopy and materials testing on a wide range of materials and industries… read more.

In this article, metallurgist, Dawn DiMarco provides an overview of the processes involved in a typical metallurgical failure analysis. Her discussion describes various properties of metals that can…

Materials science experts are often called upon to investigate fastener failures across a multitude of applications, from everyday consumer products to highly sophisticated industrial machinery. In…

This article, written by our materials science practice, discusses a few case studies involving jet engine failure and what went wrong to cause it. It Is an Unfortunate Reality That Planes Crash Every…