In rear-end highway collisions involving a stopped or slow-moving vehicle, it is common for the driver of the striking vehicle to say that they did not realize the lead vehicle was stopped or moving very slowly until it was too late to avoid the crash. Drivers in these situations likely experienced a phenomenon called “looming.”

Looming is an issue that frequently comes into play in litigation when determining whether the driver perceived and responded to the slower moving or stopped vehicle in a reasonable amount of time and whether the driver’s actions were a cause of the crash. This article provides an introduction to looming within the context of vehicle crash cases.

Many vehicle crashes involve a driver rear-ending a slow-moving or stopped vehicle on the highway. These crashes often involve vehicles that have recently entered a lane of travel but have not yet accelerated to highway speeds or disabled vehicles that have slowed or stopped in the lane of travel. A driver’s ability to avoid rear-ending a slow-moving or stopped lead vehicle depends on a number of factors, but almost always depends on a driver’s ability to detect their rate of closure to the slow-moving vehicle. While drivers can easily determine that they are approaching or getting closer to a leading vehicle, it is difficult for drivers to estimate closing speed, or how quickly they are approaching the lead vehicle, until the vehicles are close together. In scientific terms, the perception of the rate of closure to a lead vehicle is commonly referred to as “looming.”

Why only 195 feet in this example? Because that is the calculated point of looming detection.

The point of looming detection (PLD) is the distance from an object or vehicle at which an observer is first able to detect the rate at which he/she is closing in on that object and will strike it unless action is taken.1 The PLD is calculated using three factors: the relative speed between the two vehicles, the width of the lead vehicle, and the looming threshold value. 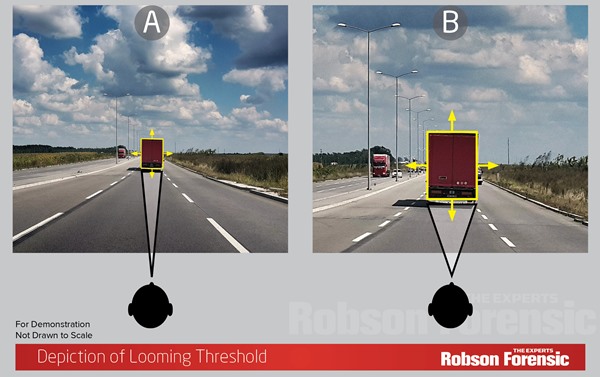 Research on perception-reaction time (PRT) in response to looming indicates that most drivers who experience looming under real-world conditions are able to respond to looming by braking within 1 second or less. This PRT value assumes that drivers are looking at the slower-moving vehicle at the instant the threshold is reached. However, a reasonably attentive driver who is scanning the roadway environment may not be looking at the slower-moving vehicle at the instant that looming becomes perceptible. Interestingly, drivers who look back at the lead vehicle after the looming threshold has been surpassed can respond in less than 0.5 seconds, on average.2

An investigation of a rear-end collision involving a slow-moving or stopped vehicle on a high-speed road includes calculating the point of looming detection, determining the appropriate perception-reaction time for the driver, and analyzing whether there was sufficient time and distance for the driver to avoid the collision under the circumstances.

If your case involves a rear-end collision with a slow-moving or stopped vehicle, submit an inquiry to discuss how looming may have played a role in the collision.

This article provides an introduction to the science of human factors and the concepts utilized by human factors experts to design products and environments that minimize human error related mishaps.…

This article discusses the human factors behind autonomous vehicles; it provides an overview of the various levels of vehicle automation and also discusses some of the challenges involved in…