In this article, structural engineer, Mark Duckett, P.E. discusses roof failures associated with snow loads. Topics of discussion include reasonable loads that roofs are designed to support and the role of a forensic expert in determining the cause of failure. 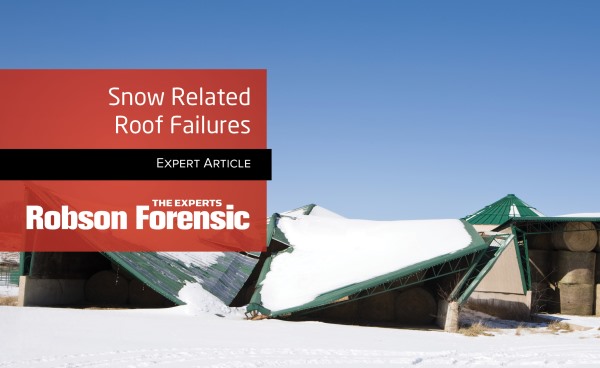 Investigating Snow Related Roof CollapsesRoofs are designed to support reasonably anticipated dead and live loads and those loads are quantified by Building Codes. Dead loads represent the self weight of the system while live loads are the loads imposed upon those systems; typically by water, wind and/or snow. Roof snow loads, in particular, can sometimes exceed design load levels in cases where snow accumulates; deep accumulation of snow on a roof can result in overloading or collapse of a roof system. Flat roofs are particularly vulnerable to snow accumulation, as are areas behind high parapets or other roof projections such as roof-mounted mechanical equipment. According to FM Global studies, snow load is the most serious cause of roof collapse.Some building roofs fail under snow loads that a properly designed and maintained roof should have been able to sustain without collapsing. If structural supports were allowed to deteriorate or were modified, or if alterations to a building caused unusually high drifting, those actions may cause premature failures. When large accumulations of snow are forecast, snow can be removed or reduced to prevent structural overloading.If a building’s roof does collapse, the owner should immediately safeguard the premises and restrict access to the building. Next, as a first step towards repairing the roof and recovering damages resulting from the collapse, they should contact their insurance carrier and arrange for an engineering expert to evaluate the stability of the remaining structure. That expert, or team of experts, can investigate the failure to determine cause and mode of the collapse.Robson Forensic engineers and architects are frequently engaged to investigate roof failures. Our experienced forensic experts can help to determine:It takes a construction professional to determine these factors, and it is best that an engineer or architect be on site soon after the collapse, although determinations can be made post cleanup based on photographic and other evidence.

The engineers & architects at Robson Forensic are frequently retained to investigate structural failures to determine the cause of failure and extent of damage. Our experts are located throughout the country and perform investigations in all fifty states.Architectural ExpertsArchitects are experts in the built environment, from design and construction to inspection and maintenance. The architects at Robson Forensic provide investigations into a broad range of claims involving the design, construction, and maintenance of buildings and outdoor environments, including building failure issues.For more information visit our Architectural practice page.Civil/Structural Engineering ExpertsCivil engineers design and build many of the structures we encounter on a daily basis. Engineering experts specialize in determining the cause of structural failures and evaluating the integrity of compromised structures.For more information visit our Civil Engineering practice page.Meteorology ExpertsUsing both government and private weather records, our expert meteorological reports are written specifically to the details of your case to provide insight on snowfall rates and accumulation.For more information visit our Meteorology practice page.

In this article we explore the engineering issues associated with the load requirements of atypical structures, referred to in building codes as other structures. Investigating an Atypical…

In this article, structural engineer, Mark Duckett discusses building demolition and the concept of “reverse” construction. Building Demolition Remember the game Jenga? In that game,…