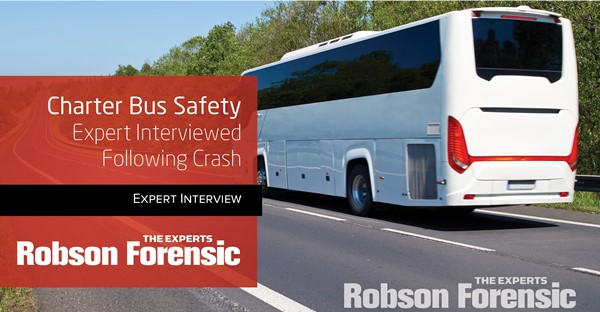 Following the March 13th crash of a charter bus that was returning Houston area High School students from a Florida band trip, producer’s from NPR’s Houston Matters program interviewed Commercial Transportation Expert, Brooks Rugemer. Brooks, and other experts at Robson Forensic are frequently retained to investigate the cause of motor vehicle crashes involving buses, heavy trucks, and passenger vehicles. In this interview, Mr. Rugemer discusses the early stages of investigating such incidents, the safety of charter bus operations, and relevant regulations. A transcript from the interview is available below and a recording of the interview can be accessed on Sound Cloud. (https://soundcloud.com/houstonmatters/charter-bus-safety) Brooks’ interview begins around the 1 minute mark.

Transcript From Interview Between Craig Cohen and Brooks Rugemer:

CC: This is Houston Matters. I am Craig Cohen. We are continuing to follow developments in a bus crash involving Houston area High School students in southern Alabama. Authorities say a charter bus carrying Channelview ISD band members from a Disney World trip plunged into a ravine around 5:30 this morning. It is not immediately clear why. An Alabama state trooper says the driver was killed, everyone else on board, about 45 people were taken to area hospitals. The charter bus company is based here in Houston. Again I’ll stress that we don’t yet know why this crash occurred and don’t want to make broad suppositions in this case. There are however questions to ask about rules and regulations that cover charter bus safety. To answer those, we are joined now by Brooks Rugemer. He is a commercial transportation specialist with Robson Forensic. Brooks, welcome to the program.

BR: Hi. Thanks for having me.

CC: What’s your experience with safety and regulation in this particular industry?

BR: Well, most of my career I have been involved in commercial trucking safety. For the past 12 years I have been a bus and truck crash investigator with an engineering firm in Lancaster, PA.

CC: As officials investigate what caused this crash in Alabama, what information do you think they are looking for?

BR: The first thing they are going to look at will be the route. I have done a little bit of research ahead of time. Bus drivers are limited to a 10 hour length of drive following an 8 hour off-duty break. So where the crash happened it’s roughly 480 miles from Orlando. They have 487 miles to get to Houston. This entire trip couldn’t have been made in one driving segment. So the NTSB and the local officials will look at where the driver started, where he was during his trip and when his next [time] off was supposed to happen. They will also look at his training, his pre-appointment hiring, documentation to see if he was properly hired and properly trained and qualified to be operating this bus.

CC: And to get on the timing, I don’t want to make any suppositions here but you assume if its 480 miles roughly from Orlando to the site of this crash, assuming that they stayed on the Interstate, would have been I-75 up to I-10, you can kind of get a sense of how many hours likely had been on the road. It would have been, I imagine would have exceeded that 10 hour mark, probably it would not have.

BR: Of course, and don’t look at where this driver started with his strip. Did they start the trip yesterday and take a break last night, overnight, and start again this morning. What they will also look at is even if the driver was legally able to be on the road at this time. They’ll look at the details of the crash, how the driver left the roadway. They are looking for skid marks or any other indication of why this happened. We know from experience and the NTSB and other agencies have put out studies showing that between the hours 1:00 AM and 5:00 AM are the times when most crashes happen. So the driver could be legal and be allowed to be on the road but there still could be a fatigue or drowsiness issue. Again the NTSB will collect all the data, they will go through the driver’s and motor carrier’s records and try to determine all of this.

CC: To the motor carrier, when you mention that the charter bus company itself, when you examine the history of the company in terms of safety and crash history what exactly are you looking for? Are there certain red flags to look for?

BR: Sure, they are going to go through their action log. There is a delineation between the type of crash that must be reported to the Feds and the type that they must have on file. So this crash obviously will be a recordable [incident] because there is a fatality. They will look at the result of the crash and the details of the crash. That information is not public and so you and I cannot look that up and find out the details of the crash. As has been reported, First Class Tours has been involved in four other crashes, one concerning a fatality of a pedestrian. I was able to look that one crash up and at least find that the driver was not cited so even though it is reportable there is no indication that that driver was at fault. But again there is not enough information to say that with any certainty.

CC: Have there been issues with this industry in the past? Anything in particular that we ought to know about chartered buses in past crashes?

BR: There has been, Craig. On the East Coast here, over the past several years there have been crashes where a tour bus has been involved in a horrible crash and they reopened under a different name. The Feds call this a reincarnated carrier. And how they find these things is that there is technology and software that will cross reference the principal owners of the bus company and the physical address of the corporate office. They even cross reference The VIN number. So today if a bus has a crash and the owner switches place with the finance officer, and there is a new CEO and a new bus company name, yet it’s the same group of people operating the same unsafe bus. I don’t know if that’s what happened here. It’s too early to make that determination but that’s something that the Feds are aware of and there’s been several horrible crashes on the East Coast between the Virginia D.C. area and New York City involving bus companies that have crashed and re-opened under another name.

CC: I am sure there are some listeners who are wondering why they didn’t just use the regular school bus and school bus drivers. But this is common, right? For schools to use charter buses?

BR: Sure. For long distance trips like this, think about the last time you were on a school bus. It’s rather sparse. It’s nothing that’s going to be a comfortable ride for however many miles—I think from Orlando to Houston it’s nearly a thousand miles. It’s very common for school systems to hire coach companies like these. Not only for the comfort of the passengers, but there are restroom facilities on the bus, there is better storage for gear—a lot of sports teams travel this way so there is room for their athletic equipment.

CC: What are some ways you think this particular industry should be improved in terms of regulation and training?

BR: We are talking about more than hauling cargo, we are talking about our children. I am a parent and I know lot of parents are listening. I feel for the parents and the kids involved here, it was a terrifying crash. But bus drivers need to be held to a higher standard. The training and the vetting process need to be as strict as it can be and not just the vetting for safety infractions; you want to vet for past drug and alcohol abuse, driving citations, suspended licenses, those sort of things.

CC: Brooks Rugemer is a commercial transportation specialist with Robson Forensic. Brooks, thanks very much for talking with me.

Many of the systems and components that record incident and crash data on heavy trucks are different than those found on conventional passenger vehicles. In this article, vehicle engineer Marcus…

In this article, one of our automotive engineering experts explains some of the engineering solutions that are used to improve safety for those entering and exiting large trucks. This includes a…