In this case, a vehicle driver was fatally injured when her vehicle struck an unattended horse in the roadway. The horse had escaped from an arena where it was confined for the first time the previous evening. Robson Forensic was retained by plaintiff’s counsel to determine if the actions/inactions of the property owner created dangerous conditions that caused or contributed to the fatal injury of the plaintiff. 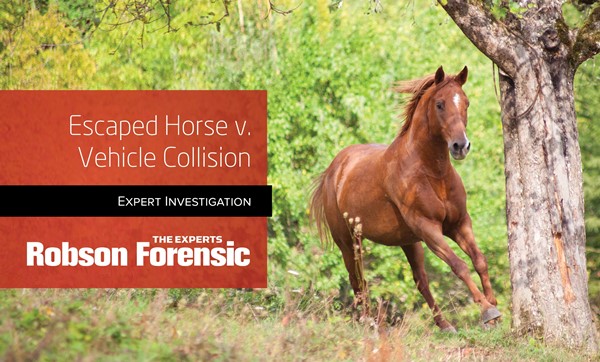 Description of the Event

On the evening before the fatal crash, the property owner introduced two new horses to his property. Upon their arrival, the horses were placed in an arena with cattle and other livestock. That evening the horse involved in the fatal crash escaped from the arena.

The manner in which the horses were introduced to a new location, as well as the adequacy of the arena fencing were the main technical issues addressed by our expert.

Introduction of Animals to the Arena

Within every herd, a “pecking order” is established, and every animal fits into that hierarchy from most to least dominant. When new animals are introduced into a group, an adaptation period occurs in which the pecking order is reorganized. The adaptation period can range from a few hours to a few days, depending on the behavioral tendencies of the groups.

A commonly accepted practice is for the introduction of new animals into a group to occur during a time of the day that provides adequate time to observe the animals and ensure that any dominance issues have been resolved. Unresolved dominance issues among animals within a shared enclosure will frequently result in animals reverting to their basic instincts of “fight or flight” during the hours of darkness. This fight or flight response is usually precipitated by a display of agonistic (aggressive) behavior between animals as they establish the dominance hierarchy.

In this instance, the issue of dominance was further complicated by the presence of multiple species, in this case being horses and cattle. The property owner failed to ensure that the new animals were introduced properly to the arena; this was a cause of the horse’s escape and the plaintiff’s crash.

The owner violated best practices by placing the horses in an arena with cattle and other livestock late in the day. This method was not consistent with common practices that owners of horses and livestock should know. In fact, the owner testified that he knew the proper protocol of introducing new animals to a group.

Adequacy of Arena and Fencing

The arena in this incident was constructed using metal corral panels attached to wooden posts. Photographs of the arena showed that several of the corral panels were secured at the top of the panel with a rope or chain, yet several were not secured to the post at the bottom of the panel.

In this case the property owner failed to provide adequate fencing that inhibited the horse from escaping. The failure to properly secure the panels and inspect the fencing at the time that the horse was introduced to the arena violated industry standards and allowed the horse to escape form the arena; this contributed to the cause of the plaintiff’s fatal crash.

Horses are predictable and understanding their behavioral tendencies is critical. The defendant in this case failed to follow established best practices of animal science by introducing new animals into the arena late in the day, thereby increasing the likelihood of unresolved dominance issues carrying into the night. These actions, combined with the inadequacy of the arena fence, allowing for the unknown and uncontrolled release of the horse outside of the arena, created the dangerous conditions that caused the plaintiff’s fatal crash.

Robson Forensic provides specialized forensic experts to investigate injuries to humans as well as claims of neglect and abuse toward animals. Our experts can approach these investigations from the perspectives of horse trainers, facilities owners, nutritional specialists, and more.

Submit an inquiry or call 800.813.6736 to discuss your case and how Robson Forensic can assist.