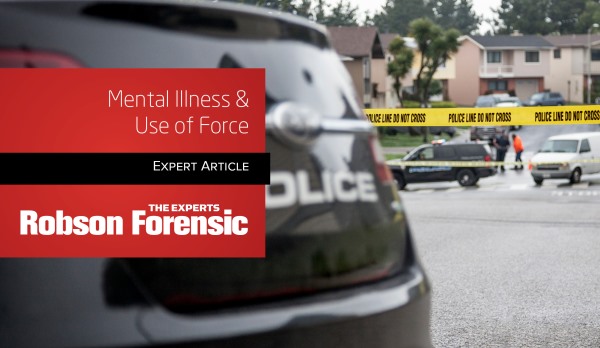 Law enforcement officers have a difficult job that may require responding to varying calls during their shift. These calls may include traffic accidents, domestic violence disputes, welfare checks, robberies, and assaults. Any one of these calls can be made more complex when law enforcement officers are confronted by individuals with severe mental illness or emotional distress. Imagine an officer responds to an emergency call from a woman who stated that her cat was “demonized.” Upon arrival, the officer is confronted with a woman holding a knife to her own throat stating that she must “cut the demons out.” The initial decision made by the officer may mean the difference between a peaceful resolution to the situation, the use of force, or, in the worst-case scenario, having to call an ambulance for emergency medical treatment. For the woman, the actions of the officer may mean the difference between receiving the mental health treatment she desperately needs or being charged with resisting arrest and assaulting an officer and being placed into a criminal justice system. The officer in this scenario is first tasked with evaluating the situation to determine if the woman is an imminent threat to the safety of herself, the officer, or the public. In most instances, the officer has tools available to facilitate a peaceful response that leads to the best outcome for all parties involved. One of those tools is Crisis Intervention Team training.

Crisis Intervention Team (CIT) training is a specialized mental health response program designed to train officers to effectively interact with individuals experiencing emotional distress (and those diagnosed with a severe mental illness) in the community. However, CIT programs are more than just training, they involve collaboration with mental health care providers, the existence of a 24/7 mental health treatment facility, and partnerships with agencies in the existing mental health care system. Without all these linkages, a CIT program simply is not complete or effective. For example, without a 24/7 mental health treatment facility available, jail may be the only option for the officer and this option, sadly, requires a criminal charge and results in the criminalization of mental illness. Alternatively, the officer may rely on collaboration with mental health care providers and, if the situation allows, a trained clinician may be brought to the scene to assist in de-escalation and resolve the situation without force or criminal charges.

CIT training may allow the officer in this scenario to effectively divert the woman in crisis to appropriate mental health treatment. For example, if the officer were able to de-escalate the situation and convince the woman to be transported to the 24/7 mental health treatment facility, the woman may receive adequate treatment. However, if the woman is taken to jail, there are still other options for diversion. The woman may be diverted during her initial bond hearing by a judge or magistrate to a mental health treatment facility and charges may be dropped. If the woman remains in jail, she may be diverted to a “mental health court” or other specialty docket in order to receive treatment. If she is ultimately charged and convicted of a crime, she may be diverted to treatment as a condition of her sentence. However, the best results occur when individuals are diverted in their initial reaction with law enforcement officers. This is the least stigmatizing and most cost effective method of diversion and ultimately results in the best outcomes.

The academic literature on CIT suggests positive outcomes for a variety of variables including increased levels of officer empathy, patience, and responsiveness to individuals who are experiencing an emotional crisis. Additionally, a majority of studies have found a significant decrease in officer arrest rates as well as very significant reductions in SWAT team responses. Lastly, CIT trained officers report feeling better prepared to engage with individuals in an emotional crisis while working in the field. CIT training also has a positive effect on the public’s sense of procedural justice. This means that individuals interacting with CIT trained officers reported being treated with more dignity, respect, and politeness. These same individuals also report feeling as though they have a “voice” with respect to their situation and reported trusting that the attending officer has a stake in their personal well-being (traits that have been linked to fewer lawsuits towards police departments). For example, the woman in our scenario may, when interacting with a CIT trained officer, be more likely to agree to be taken to the hospital or other mental health treatment facility. CIT training programs have proliferated in recent years. In 2007 there were approximately 550 CIT program nationwide. To date, there are over 2,700 CIT program nationwide and the only states that do not have CIT programs in any jurisdiction are Alabama, Arkansas, Delaware, Rhode Island, and West Virginia. CIT has quickly become the “gold standard” for officer training when dealing with individuals in an emotional crisis or individuals diagnosed with a severe mental illness. Given this level of proliferation and acceptance, CIT training is something that is expected to be seen in most police departments in the future.

In the context of legal disputes, it may be appropriate to evaluate the policies, procedures, and actions of law enforcement and other entities within the framework of CIT best practices. Analyses of this type can be applied to interactions that occur involving law enforcement, correctional officers, first responders, and other public/institutional employees. Specific incidents typically involve the use of force, but can also include broader claims of abuse, neglect, or exploitation.

For more information on CIT investigations please submit an inquiry or contact the author of this article.

Robson Forensic photogrammetry expert, Steven Becker appeared on the Nancy Grace show on May 16, 2016 to help viewers understand what kind of information analysts can hope to glean from the…

In this article, the health care experts discuss the process by which adverse medical events are evaluated by medical professionals and forensic experts. The article describes the concept of an…